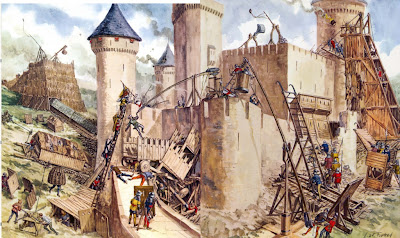 Thud, thud, thud - that's the sound of mortally wounded Tories falling from the battlements of Fortress Harper.  Duffy, Wallin, Tkachuk, Lebreton, Wright, Perrin, Toews and, by some accounts, they're just for starters.   The King, it is said, has retreated to the castle keep with his trusty valet (now chief of staff) knowing he has more to fear from enemies within his walls than from those laying siege beyond them.   At times like this there's enormous value in a King's head.

When you choose to live inside a castle you're apt to discover at some point that it can be as easily a prison as a sanctuary.  It may keep you safe for a while but everyone knows right where you are and, eventually, they'll figure out how to get at you.   And, when it's obvious they've discovered how to breach your walls, others on the inside begin to look for ways to save their own skins.  You begin to worry as much about catching an arrow in the back as one in the chest and, at that point, it's the safety of the keep for you.

It promises to be a long, hot and dangerous summer within the walls of  Fortress Harper.
Posted by The Mound of Sound at 8:52 AM

And, after making life so uncomfortable for so many others, Mound, it is only right that Mr. Harper should feel besieged.

Yes indeed, Owen. One of my Ottawa Tory friends posed this riddle: what do Mike Duffy, Pamela Wallin and Arthur Porter (now in jail in Panama fighting extradition) have in common? It's not that they're all potentially facing prosecution. Something else. Any guesses?

Lesson from BC: Do not cease the assault until the enemy is actually defeated. Yes, it looks bad for Harper and that is cause for cheer, but do not ease up, do not take the high road, do not stop unearthing skeletons from those closets until the bastard's head is safely on a metaphorical pole.

Have in common? Well, the obvious is they're all scumbucket Conservative Harper appointees. Um, they all took wads of cash that didn't belong to them? No, I'm stumped.

The thing is, PLG, it's not the Libs or the NDP that are bringing Harper down. The opposition parties have been utterly ineffectual which is a dismal portent of what we might expect from them in government. If the country has to rely on Trudeau or Mulcair, Canada loses and Harper wins.

Let us hope for a speedy abdication. Happily, the king, owing to his paranoid and autocratic style and his demand of complete obeisance, has no one who can credibly replace him.

I was imagining more 'bunker under the Saddledome' than medieval castle, but either works. Steve is finished. Even if he tells the truth now, nobody will believe him.

I am looking forward to the next 'Downfall' parody.

Steve's numbers are tanking and his underlings won't tolerate that for long, especially not with his bullying nature. He demanded loyalty but got only obedience instead.

So, why did Vic Toews eject from cabinet, caucus and Parliament itself so abruptly? There is significance in "undue haste." In law, it's a recognized "badge of fraud." Vic is giving the appearance he's in a big rush to get out of Dodge.

The BEST way for Harper to leave the political scene would be to lose to Trudeau. Rather than being honoured by future Cons as a great PM, he would go down as the Con who had the long-sought majority and blew it. Not only that, but he lost to Trudeau. The collective angst and the emergency wards filled with a rash of rapid onset aneurisms here in Calgary would be quite the spectacle to watch.

When we were dropped to 40 seats in 1984, my PC 'friends' taunted me relentlessly. When they were reduced to, as the maître d' once said, "a party of two" I said nothing as the electorate had spoken volumes. The next time I will not be silent. There will be a next time and no one deserves humiliation more than that smug prick, Dear Leader™.

I don't think Harper will contest the next election if his numbers are in the sewer. If he's not toppled by the current scandals he may try to just force the Northern Gateway through and then quit, utterly despised.

Just as Kim Campbell paid for Mulroney's fall from grace and Paul Martin for Jean Chretien's, Harper's successor will probably have to wear Sideshow Steve's disgrace at the polls.

The Harperites have screwed up on so many files that their corporate sponsors must be wondering why they even paid for them at all.

Perhaps now is an opportunity for Canadians to determine Canadian issues.

Harper isn't gone yet. I wish he were but he is still there. This dragon is not going down easily. He has two passions, two ambitions in his political life: his hatred for everything Liberal and his hatred for universal health care. This hatred drives Harper and he will do whatever it takes to stay in power until all of the opposition forces, including mainstream media, join forces to drive him out.

You're right Toby. His biggest passion by far is his utter hatred for everything Liberal. His hatred for anything Liberal and his hubris will prevent him from resigning. That's why a defeat at the hands of Justin Trudeau and the Liberals would be so sweet. It would destroy him and his legacy within the CPC. The COALITION will break apart again with the theocratic malcontents sulking for another 10-15 years. Perhaps we'll see the rise of a reborn PC party and the theocrats can sulk off and join the Heritage Party or some other group of dogmatists.

A lot will depend on whether Harper can survive through the summer and this fall. I'm hearing that there is a lot more of this scandal to come.

The following is not related to your blog but perhaps you would take a look at the following: After reading Greg Malone’s fascinating and thought-provoking book, “Don’t Tell the Newfoundlanders,” I couldn’t help but think of a story I’ve told in this space on a couple of occasions about a poignant conversation my mother had with her father after Newfoundland had decided by the slimmest of margins to join Canada.

You can find the rest of the commentary on "The world according to Malone" written by:
Bob Wakeham has spent more than 40 years as a journalist in Newfoundland and Labrador. Bob has been nominated for the Canadian Book Award. http://www.thetelegram.com/Opinion/Columns/2012-12-15/article-3140781/The-world-according-to-Malone/1