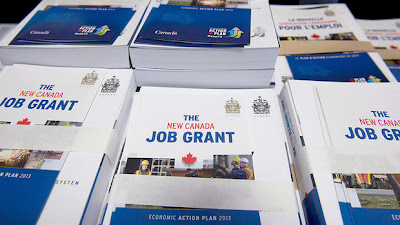 If you've seen any of the seemingly endless TV ads (paid for out of your pocket) you would assume that the Harper regime has instituted something called the Canada Job Grant programme.  We're told it's to fund job training for Canadians.

There is no Canada Job Grant programme.   Harper dishonestly ran ads about an initiative that doesn't and may never exist.  He flooded the airways with those ads before he'd even negotiated essential deals with the nation's premiers who are supposed to be splitting the tab with the feds.

Now it appears the premiers aren't real happy about what they perceive to be Harper's cash grab.

Canada's provincial and territorial leaders vowed Thursday to fight Ottawa's controversial plan to fund jobs training for workers, saying the new scheme would require them to come up with more than half a billion dollars in extra cash.

There's concern across the board over the Canada Job Grant, said Ontario Premier Kathleen Wynne, who is hosting the Council of the Federation meeting.
"There really was a very strong feeling that the program as it exists won't work," she said.
The Harper government wants to divert some of the money it gives to the provinces and territories to the new program, which would provide a grant of $15,000 per worker. The provinces and territories, as well as the employers, would each kick in $5,000.
But the premiers are worried that it won't give them enough flexibility to direct the money where it's needed most and could jeopardize existing provincially run programs. Small businesses aren't interested in taking part in this program either, Wynne said.
Posted by The Mound of Sound at 8:07 AM

It's Dr. Goebbels at work, Mound. It's amazing how the man believes he can say anything and get away with it.

As far as I can tell, Owen, it's not that Harper 'believes' he can say anything and get away with it, it's that he knows he can thanks to a weak and divided opposition and a disengaged electorate. This guy knows he can get close to a majority simply by preaching to a very uncritical choir, Owen.

It is a shame Mr. Harper can't think of any projects that would provide employment to Canadians....like....mind crossing...replacing our crumbling infrastructure. Setting aside money for entrepeneurs to rebuild business that has been lost to Canadians such as designing and building and selling our own line of vehicles. A biggy...lets produce most all we need to live as a society and that doesn't mean oil but our own system of business and not following the US. That would creat jobs, wouldn't it?

Harper had a perfect opportunity to configure Canada's economy to address our infrastructure problems during the global recession of 2008. He didn't.

Harper could have set Canada on the path to genuine stimulus/recovery spending when he prorogued Parliament. Instead he came back in early 2009 with a "throw a new deck on the cottage" stimulus budget.

In doing this Harper showed he can not bring himself to act decisively. He'd sooner throw money away than invest that money himself on infrastructure that will pay dividends to the country for decades.

Now, with climate change accelerating the deterioration of infrastructure, Harper still cannot bring himself to institute a "Marshall-plan" infrastructure programme.