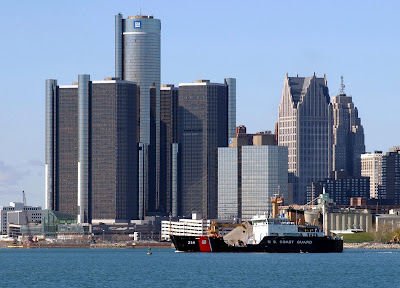 The Motor City has gone bust.

Detroit, the cradle of America’s automobile industry and once the nation’s fourth-most-populous city, has filed for bankruptcy, an official said Thursday afternoon, the largest American city ever to take such a course.

Founded more than 300 years ago, the city expanded at a stunning rate in the first half of the 20th century with the arrival of the automobile industry, and then shrank away in recent decades at a similarly remarkable pace. A city of 1.8 million in 1950, it is now home to 700,000 people, as well as to tens of thousands of abandoned buildings, vacant lots and unlit streets. 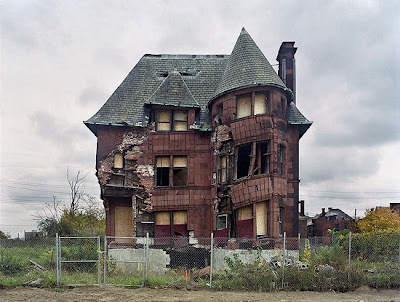 Another Camden NJ? A 'dead zone'. Check out a piece by Chris Hedges on Camden (awhile ago), to see how America deals with these horrible HUMAN tragedies.

What I find fascinating, Linda, is how Detroit remains ready for rebirth. The city always had a large inventory of truly magnificent architecture, buildings that now stand derelict and abandoned. Like typical ghost towns, Detroit has become a ghost metropolis. There was never any economic reason to demolish that classic architecture and most of those buildings remain structurally sound. The Westin hotel is an example of a classic derelict Detroit building that underwent restoration and repurposing.

Detroit is like a barnyard boot - it needs a good scraping. It does, however, have potential.

My first thought on Gov Snyder's appointed city manager going the bankruptcy route, was the RoboCop movie, except in this case the Omni Consumer Products corp takes over the whole city.

The buzzards have already landed, Willy. They're moving to take over Detroit's crown jewel, Belle Isle, a 982-acre island park where Lake St. Clair meets the Detroit River. Their plan is to demolish the one decent park Detroiters have, their historic refuge, and turn it into a preserve for the rich. It's perfect. The river even provides a 12-knot moat. The ultimate in gated communities.