Let's Retire the "Once in a Hundred Years" Label 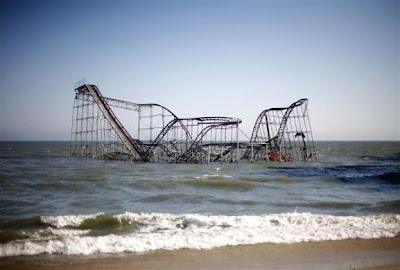 There's something reassuring about bad events labelled "once in a hundred years" because you know that you've survived something you won't have to deal with again in your lifetime.  You've dodged that bullet.  Don't worry, be happy.

But the two flooding events that hit Toronto this year and the 2008 and 2013 floods that devastated Calgary should be cause enough to ditch the "once in a century" assurance about anything.

The Atlantic Cities is running an article entitled, Flood, Rebuild, Repeat: Are We Ready for a Superstorm Sandy Every Other Year?

The article laments the destruction of the South Ferry subway station, renovated in 2009 to the tune of more than half a billion dollars.  Now it's going to cost more than that to repair the damage to the station from Superstorm Sandy flooding.   And New York City authorities had ample prior warning of the risk.

"Back in February 2009, a month before the station was unveiled, a major report from the New York City Panel on Climate Change—which Mayor Michael Bloomberg convened to inform the city's climate adaptation planning—warned that global warming and sea level rise were increasing the likelihood that New York City would be paralyzed by major flooding. "Of course it flooded," said George Deodatis, a civil engineer at Columbia University. "They spent a lot of money, but they didn't put in any floodgates or any protection."

"And it wasn't just one warning. Eight years before the Panel on Climate Change's report, an assessment of global warming's impacts in New York City had also cautioned of potential flooding. "Basically pretty much everything that we projected happened," says Cynthia Rosenzweig, a senior research scientist at NASA's Goddard Institute for Space Studies, co-chair of the Panel on Climate Change, and the co-­author of that 2001 report."

The thing is, you've got to spend money to save money.   Nobody wanted to spend the money for floodgates to protect South Ferry and that sort of neglect is going on everywhere.

Who is doing any realistic assessment of the frequency and severity of extreme weather events our towns and cities will be coping with over the next twenty to thirty years?   Who is identifying the projects we need to get underway, the taxes we need to raise and spend, so that we don't wind up having to spend even more in the short to mid-term?   We're much better at doing studies than we are at doing anything about them.

We have our shares of looming problems in Canada but they've got'em supersized south of the border.

"...with sea levels rising along the East Coast—a natural phenomenon accelerated by climate change—scientists project that in our lifetimes what was once considered a 100-year flood will happen every 3 to 20 years. And truly catastrophic storms will do damage unimaginable today. "With the exact same Sandy 100 years from now," Deodatis says, "if you have, say, five feet of sea level rise, it's going to be much more devastating."

Roughly 123 million of us—39 percent of the US population—dwell in coastal counties. And that spells trouble: 50 percent of the nation's shorelines, 11,200 miles in all, are highly vulnerable to sea level rise, according to the National Oceanic and Atmospheric Administration. And the problem isn't so much that the surf laps a few inches higher: It's what happens to all that extra water during a storm.

Climate change is sapping the strength of the U.S. government to provide disaster relief to its people.   Severe storm events of increasing frequency and intensity are going to cause more than storm damage.  They're going to trigger a retreat from the sea for saltwater inundation leaves lasting damage and can contaminate coastal freshwater resources leaving large areas incapable of supporting their previous population base.   Governments wind up with the follow-on challenge of internally-displaced people - where to relocate them, how to provide for them.

We've all heard the siren's warning.  We've heard it but when are we going to heed it?

There was a very bad flood in Calgary and down the South Saskatchewan to the boarder and beyond in 1995. People suggested dyking but that was just a bunch of people blowing through there hat...now majors are still hesitant when talking about a dyking system. Everyone who live in the flood plainought to move out at their expense of course. Anyong9hensiF 9

A bit off topic but if you haven't seen this, you might want to look.

"Also on Friday, Alberta’s Alison Redford and British Columbia’s Christy Clark announced after the premiers’ annual meeting in Niagara-on-the-Lake that they would work together to “build new markets and get the highest price possible for the resources owned by the people of our two provinces.

It’s a huge step forward to resolve the two provinces’ differences over bitumen pipelines to the West Coast and achieve a fairer distribution of risk and benefits.”

No, I saw their remarks, Anon, and it was a bit stomach-churning. Calgary Conservatives played a big role in raising funds for Clark's re-election so this sort of betrayal was to be expected. Besides, these are concerns mainly of coastal British Columbians, the type that threw her out of her home riding even as her party returned triumphant.

Would she do something that low? In a heartbeat.