No Use Suing Over Spilled Wine, Eh?

This one's going to pull at your heartstrings.  It concerns an overlooked group of victims of Hurricane Sandy who may have suffered enormous losses into the hundreds of thousands or even millions of dollars from the deluge.   Can you feel the pity welling up yet?

Who are these people?  They're super-rich folks, the type who have really valuable wine collections so precious that they entrusted their treasured vintages to a special wine cellar for safekeeping. 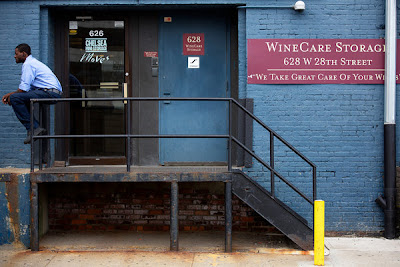 For the New York high-flyers who entrusted their vintage wines to a high-tech Manhattan storage cellar, 24-hour security and a video surveillance system seemed to guarantee the safety of their treasured bottles.

But several wealthy oenophiles are now suing the WineCare warehouse because they have not been allowed access to their Bollinger, Barolo and Chateauneuf-du-Pape for several months. Some even fear their multi-million-dollar collections may have been destroyed.

WineCare stored wine in cellars cooled to 55F (12.7 C), with humidity maintained to 60 per cent, the best conditions for vintage bottles. Clients could use a computer program to track each bottle in the 27,000 cases. A daily delivery service to dinner parties was part of the substantial fee.
But the facility was also just 100 yards from the Hudson River. And when the storm's winds whipped up a record-breaking tidal surge, the cellar flooded.

So, who is going after the company? People like these:

They include Donald Drapkin, a hedge fund executive who estimated the value of his collection there at $US5.2 million, Philip Waterman, a property investor with wine valued at $US300,000 at the site, and Lucio Noto, former vice-chairman of Exxon Mobil.

Keith McNally, a British restaurateur who runs some of the city's choicest eateries, is seeking $US3 million in compensation and damages because he said two of his outlets were forced to buy top-shelf replacement wines at full price to satisfy customers. In his suit, he described his 1500-case collection as "unique and not replaceable".

Robert Gerber, the federal bankruptcy judge, has at times sounded less than sympathetic about the plight of both sides as a result of a natural disaster that cost 44 lives and destroyed more than 300,000 homes. "There were thousands of victims of Hurricane Sandy, most of whom suffered a great deal more than your clients," he noted exasperatedly at one hearing after complaining about the speed of response from lawyers.

Not to compare Hurricane Sandy with Alberta's recent flooding but the theme is close. In the small town of Medicine Hat just before the flooding struck in all its force, it was necessary for City Hall to sand bag the north side of the river where some very expensive housing is located..like....12 million dollar homes. In the mean time, the Veiner Centre was left to flood in an area where it has flooded out many times. This building and land was donated by a Mr. Harry Veiner for the use of the elders of the community located next to a park...a lovely area. Now there is talk of moving the elders to another location with not so pleasant surroundings as as matter of fact, some down right depressing. Do you think City Hall could repair the building and build protection against the next flood in that area which is going to happen...that is a given. Hell No! Elders are not worth the effort.

Get used to it, Anyong. We're entering an era where arbitrary decision-making will become increasingly more common and will likely tend to favour the better off over others considered less worthy or, in some cases, expendable.