You See, Justin? It's Really Not That Hard.

Justin Trudeau has taken a policy stand, one calculated to trigger condemnation from the Harper regime.   Pushing on an open door, Trudeau has come out in favour of not just decriminalization but outright legalizing of marijuana possession and use.

Even Paul Martin wanted to get marijuana possession and use out of the criminal realm.  If memory serves, Martin's proposal would have permitted adult Canadians to grow up  to three plants to meet their personal needs.  Then again, I've known people who could grow a pot plant almost the size of the White House Christmas tree.

The majority of Canadians, it seems, are onside with Trudeau's views especially after we've watched how far U.S. states have gone without succumbing to a stoner crisis or crime waves.  Besides, Harper's approach is a proven and complete failure.  He can't stop people growing it, he can't stop the public buying it, he can't stop ordinary, law-abiding people using it.   What he can do, however, is maximize the income stream of organized crime.  Steve, they love you, they really love you.

And for those who think the opposition parties must not risk revealing policy in advance of last minute, 6-week election campaign, this shows why you're simply and utterly wrong.  Harper is on the wrong side of the Canadian electorate on just about anything remotely progressive.  By ducking issues like this out of fear of the dreaded, big, bad, Harper all you're doing is not staking unclaimed turf, not differentiating yourself from this rancid, clapped-out regime, not speaking to issues that resonate with the Canadian public but go unmentioned.

Harper wants to play centrist, a moderate.  Draw him in, make him take stands, force Stephen Harper to show that he's anything but moderate.   This chump has been leading with his chin for years and has triumphed thanks to an opposition too timid to take a swing.

For Canada's sake, J.T., don't stop now.   Mix it up, draw some lines.  That's how you push phonies like Harper back out to the radical right where they really lurk.   Fill the centre with progressive centrist policies.   With the political compression that set in during Iggy's watch you either have to reinflate the Liberal centre or get crushed into irrelevance from the left and the right.

J.T., I'm not a believer in such things, but if you could just somehow manage to channel a bit of your old man, you could be whipping Steve Harper like the proverbial red headed stepchild. 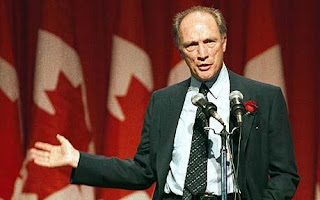 That's a great first step and as you point out mound, a no-brainer. Where I think Justin can really pound the phony economist is to show Canadians the truth around the economic action plan and its dismal failure to bolster a stagnant economy. The truth staring us all right in the face is that this gang cares nothing about creating jobs...maximizing profits is the game in town. Justin, if you're reading, go for it.

My hope (as I'm ever hopeful) is that JT is willing to fight the bullies exactly as you describe, Mound. There's only one way to bring a bully down--head-on and toe to toe. I have one in my building and by confronting her and asking questions of her which she can only answer, while at the same time proving the point--that she IS a bully, makes her illusion of strength fall away. They really are chicken hawks, who run away when it's revealed that you KNOW that about them. I hope and sense that JT and the LPOC are doing that and by treating us as adults who can think critically, WE, the voters, are being strengthened by it.

Hi Linda. I read the diametrically contrary viewpoint of Warren Kinsella. He sees this as a huge blunder. That's not surprising from someone who was on Ignatieff's campaign team, the rightleaning Liberals who sucked the progressive lifeblood out of the LPC and left it deflated and unable to resist the pressures from left and right.

If the LPC cannot find a path that restores progressivism to the party they're irrelevant. Kinsella and the Bay Street Liberals simply aren't that way inclined. Oh they might be returned to power - eventually - but they won't be able to do squat for the country in this our moment of such critical needs.

Ignatieff was the worst screw-up. When the 2008 global recession hit and Harper had to scurry to prorogue Parliament, the Liberals passed on a golden opportunity to stick Harper with his failure to see it coming and protect Canada. When Harper locked down Parliament for 8-weeks, the Libs had an ideal opportunity - and an obligation to the country - to gather the best and brightest minds and formulate a meaningful recovery/stimulus budget proposal to present when Parliament returned.

What did Iggy do? He treated it like an extended Christmas holiday and squandered that time to finish a book on the Grants, his mother's family. When Parliament returned Iggy's hands were empty except for that worthless book. He had no choice but to support Harper's farcical stimulus budget, boasting that he was putting Harper "on probation."

With that, Harper knew Ignatieff was his bitch and he proceeded to play Layton and Iggy off against each other to his great success thereafter.

Yes, by all means, showcase Harper's economic incompetence but bring something to the table at the same time. Bring progressive policies that speak to fair distribution of wealth and income in Canada, the restoration of our middle class values, and measures to attack inequality of opportunity. Be a Liberal.

I read Kinsella's stuff infrequently. I think him a bit of a self-promoting legend in his own mind. Then again I lived in North Van when he ran a disastrous, cringeworthy campaign to claim the seat from the incumbent Reform lawn ornament. As a parachute candidate, Kinsella gave the impression that winning was never on his mind. He drove a lot of support away from the Liberals and into the arms of Reform. My impressions of him weren't helped when, years later, he became a member of Team Ignatieff.

I think the LPC needs somebody with the instincts of Lloyd Axworthy to salvage the party. My ideal of a leader would be Louise Arbour, hands down.