And They Haven't Made a Movie About This Guy?

It's being called "the most interesting opening paragraph Wikipedia has ever published."  It opens an entry about British army officer Sir Adrian Carton de Wiart. 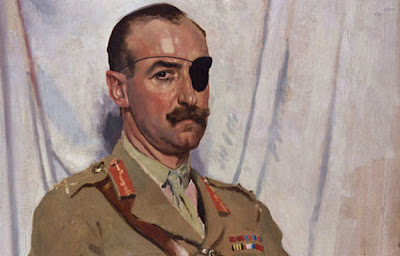 "Lieutenant-General Sir Adrian Paul Ghislain Carton de Wiart[1] VC, KBE, CB, CMG, DSO (5 May 1880 - 5 June 1963), was a British Army officer of Belgian and Irish descent. He fought in the Boer War, World War I, and World War II, was shot in the face, head, stomach, ankle, leg, hip and ear, survived a plane crash, tunneled out of a POW camp, and bit off his own fingers when a doctor wouldn't amputate them. He later said "frankly I had enjoyed the war."

Mos, I read a piece in our local paper (Brantford, ON.) in the 'Days Gone By' section. So, 100 years ago, it said--"There will be no Orange celebration on Saturday, which is the anniversay of the Battle of the Boyne. The Orangemen of this city will join in with the Hamilton brethren who are holding a big celebration, so that the only opportunity the Brantford citizens will have of hearing the Orange music on the fifes and drums will be early in the morning, when the local Orangemen entrain for the Ambitious City, and late in the evening, when they detrain. It is expected that about 150 or200 will go, accompanied by the 25th Dragoons Band." I plan to find out about these Orangemen they speak of, but I was curious about your 'take' on this. I love learning about history and appreciate your posts. Thank you.

The Orangemen are, of course, anti-Catholic, British-loyalist Irishmen.

There was a good deal of anti-Catholicism in Ontario right up to my parents' generation. Perhaps it had something to do with heavily-Catholic Quebec being just next door.

My parents, for most of their lives, had this affliction. My father told me that, in his childhood, he had seen young Protestant boys beat the hell out of unwary Catholic youth on Battle of the Boyne day in the small, southern Ontario town where he grew up.

Fortunately this contagion didn't survive WWII and my generation, the Boomers, was pretty much uninfected by it. That extended to a lot of whitebread Ontario bigotry - ethnic, racial, religious and sexual orientation-based.

I credit Trudeau with doing a great deal to usher in an era of tolerance that continues to this day. In my experience, intolerance is built on a flimsy construct of pretty irrational fears. Once you shine a bright light on those irrational fears, the structure collapses.

Thanks for your reply, MoS. I noticed a very small news-piece on "hard-line Orangemen attacking police line in Northern Ireland, today"--and I wished there was more detail to it. I also did some reading today on the 'Know Nothings', and the politics surrounding President Lincoln and the slavery era. Very interesting. So now the Kennedy dynasty takes on new meaning to me and piques my curiosity.

Thank you! Finally someone credits Pierre Trudeau with something...