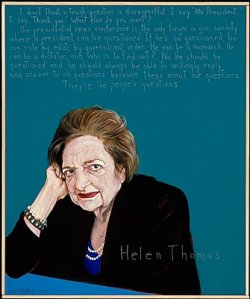 She covered every administration from Kennedy to Obama and ruffled a few feathers along the way.

Helen Thomas, whose bottomless curiosity and unquenchable drive made her a prominent White House reporter at a time when men dominated the profession, died Saturday at her apartment in Washington. She was 92.

Her blunt questions and sharp tone made her a familiar personality not only in the sometimes parochial universe inside the Beltway but also to nationwide television audiences.

Presidents grew to respect, even to like, Ms. Thomas for her forthrightness and energy, which sustained her well after the age at which most people have settled into retirement. President Bill Clinton gave her a cake on Aug. 4, 1997, her 77th birthday.

"I don't think a tough question is disrespectful. I say. ´Mr. President...´ I say, ´Thank you.´ What else do you want? The presidential news conference is the only forum in our society where a president can be questioned. If he's not questioned, he can rule by edict; by government order. He can be a monarch. He can be a dictator, and who is to find out? No. He should be questioned and he should always be able to willingly reply and answer to all questions because these aren't our questions. They're the people's questions."

In case you don't get around to reading the comments, Beijing York provided a link to a delightful exchange between Thomas and Bush Jr. White House press secretary, Ari Fleischer.
Posted by The Mound of Sound at 8:57 AM

You'll love this January 2003 exchange between the late great Helen Thomas and Bush Jr's press secretary Ari Fleischer, when the war mongering against Iraq was heating up:

Thanks, B.Y. I've added your link into the body of the post. It was delightful.