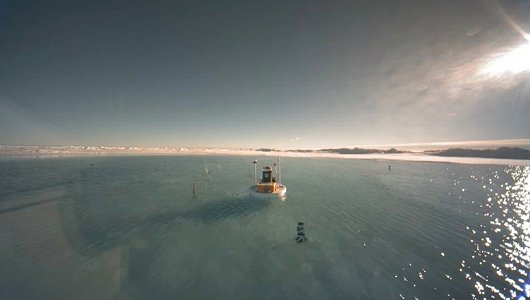 Summer time is boating time.   This year you might want to try something a bit different.  How about a spin on Lake North Pole.

The really, really good news is that global warming is a hoax.

Dr. James Morrison of the NPE Observatory says a reconnaisance of the Canadian side of the Beaufort Sea found similar lakes across the surface.

“The melt ponds have covered the whole surface and melted though north of Alaska in the Beaufort. What we’re seeing on the Canada side is really bad. It’s melted all the way through.”

While the melted ice looks dramatic, it’s the effect of the sun beating down on the half-metre deep lake that has Morrison more worried.


Erosion of sea ice happens at the bottom, under the surface, with less ice building on the foundation because of heat buildup.
Posted by The Mound of Sound at 7:30 AM

Your last sentece...let's have a good laugh, that is, if it weren't true.