It's something most people have never seen and, for those who have, it's uncommon.  Yesterday, however, I was treated to another display of a Bald Eagle death spiral.  I've witnessed this a few times before but usually in remote inlets up the coast.   This time it happened just a mile from my home over the local highway.  Here's what the spiral looks like:

I was riding, in trail, with a neighbour.  I spotted the pair of eagles around 50 feet up, spiraling in their talon death grip and seemingly out of control.  I was sure my friend ahead would hit them one way or another.   Instead, when they were about 15 feet above the highway, no more, they disengaged.  One eagle appeared to shoot straight back up into a nearby tree.   The other kept falling until it was no more than 4-feet off the tarmac as though it had seriously miscalculated.  Fortunately it pulled out in time although it was between vehicles.

The incident reminded me that, while we give up a great deal of convenience in leaving the metropolis to live in seaside towns, there are offsets.  Watching a grey whale with her calf rolling, churning the sand flats for molluscs, not 80-feet from the water's edge is surreal.  The same goes for observing pods of orca transiting your neighbourhood.  I can't begin to describe what it feels like to discover, while swimming, you're in the midst of a gaggle of curious sea lions.    A few years ago I was awakened by the incredibly loud purring of a cougar in my backyard.   Twice I've discovered a sea otter in my driveway, a hundred yards from the ocean.  Awesome.

Meanwhile I'll take this opportunity to post a photograph from The Guardian of Orangutan orphans in Borneo: 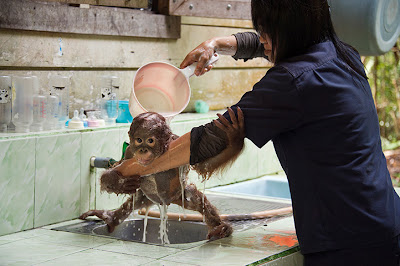 Amazing, Mound. Your closeness to nature is something I wish everyone could experience, so we could all feel in our hearts the crimes we are committing when we heedlessly harm nature with our many depredations.

I grew up on 20 acres in the central interior of BC. About 8 acres of it was pond, dammed by the beavers who had a lodge right down in front of our house. The pond was home all spring and summer to teals of several varieties, mergansers, buffleheads and mallards. One late night we were awakened by a family of coyotes yipping and howling at the full moon between the house and the shore of the pond. Bear and moose regularly passed by with no incident whatsoever. My mom and I were on the phone one afternoon this last winter and she said, "Oh! Flash mob!" I thought she was looking at the internet while we talked but she said, "there are eleven deer on the front lawn!" I cannot begin to tell you just how connected I feel to that chunk of land, nor how desperately I want it to remain as wild as possible.

I agree entirely, Lorne. If everyone could see these creatures they would lose their indifference. I ran into a British couple who became quite aggressive about all the supposed wildlife they had come to see and didn't. I tried and failed to explain to them that they might not spot the cougars or the wolves but that didn't mean those cougars and wolves didn't see them. They thought the place was a giant Safari Park.

Hi Karen. Waterfowl, coyotes, beaver, bear, deer and moose. Living with those creatures, sharing the land with nature, is so rewarding. With that much prey on your doorstep you can be pretty sure there was always a gang of larger predators - wolves and cougars especially - nearby.

My dad caught a cougar watching him once, and he backed up to the house in a hurry, and last winter mom saw tracks when she was snowshoeing. I don't know if they have ever seen evidence of wolves. I never did when I lived there. There are always lots of grouse and rabbit tracks too. The predators have a pretty big menu.