And Now the Buzzards Descend to Pick the Corpse of Detroit

You might find this surprising but there's a group of mega-rich investors just waiting to pounce on a parcel of Detroit real estate.

They call their vision the "Commonwealth of Belle Isle" and they have big plans for the one decent park the people of beleaguered Detroit have remaining to them.   Belle Isle is a 982-acre island in the Detroit River near where the river meets Lake St. Clair.  It's the biggest municipal-owned, island park in the U.S.

This is what the vultures have in mind for Belle Isle: 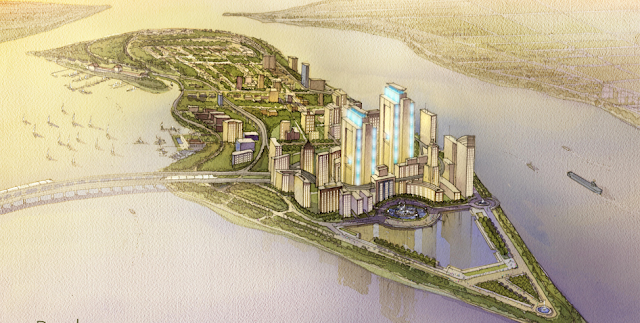 Consider it a fortress with a 12-knot moat, the ultimate gated community/municipality.   Here's the spiel from their web site:

The setting is Belle Isle, 30 years in the future.  Twenty nine years prior (2014), Belle Isle was sold by the city of Detroit for $1 billion dollars to a group of investors who believed in individual freedom, liberty and free markets.

They formed their own city-state, with innovative systems of government, taxation, labor and money.  People soon came from all over the world to be part of this culture of unlimited opportunity.  Belle Isle became the “Midwest Tiger,” rivaling Singapore as an economic miracle.  Although numbering only 35,000 citizens, it generated billions of dollars in desperately needed economic growth and became a social laboratory for the western world.

Detroit shared in the genuine Renaissance.  The large sum paid for Belle Isle was used to train Detroiters to fill the huge need for construction workers on Belle Isle.   Beyond this, the construction of this remarkable new nation by private money provided years of economic boost for Detroit and Southeast Michigan, and the sparks generated by the fires of “can do” optimism and a new social pact jumped the river, causing factories and farms to be built in Detroit, restoring it to its former glory.

Big changes take big ideas, power arising from noble intent, and leaders of great vision and courage.  It happened before with the birth of America.  It can happen again.

All this is possible on Belle Isle.

Relax, Commonwealth is just a book, a novel, complete fiction - or is it?  Neither Washington nor Ottawa would tolerate the creation of an island nation state at a critical choke point to Great Lakes navigation.   That's not to say, however, that Michigan would reject a hefty offer to privatize Detroit's last true, great park.
Posted by The Mound of Sound at 8:02 PM

There are a core of wealthy people who think a takeover of Belle Isle would be a dandy idea.