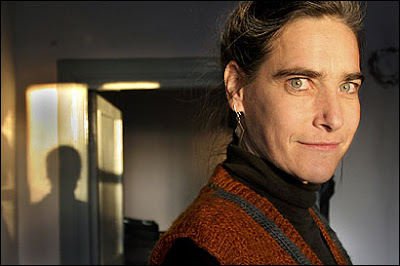 When it comes to Afghanistan, honesty is a rare and elusive commodity.  The Karzai government doesn't understand the term.   It's something of an inconvenient notion to western military leaders and our political leadership is just as bad, often worse.   That's why, a dozen years later, the place is still just a mess.

Throughout this decadal plus fiasco, there has been one very clear-headed, honest voice - that of American Sarah Chayes.   She arrived in Afghanistan in December, 2001, and immediately got to work.  Among other initiatives she established the Arghand cooperative.  In 2010 she served as a special advisor on South Asia to the Chairman of the Joint Chiefs of Staff.   She's been blunt and honest in her assessments of what ails Afghanistan - and few have listened.  Her Wiki bio speaks of her extraordinary accomplishments.

One of the earliest posts on this blog, back in 2006, focused on Sarah Chayes.  What's particularly telling about that account is that back then, as today, she has maintained that the key to achieving something, anything meaningful in Afghanistan doesn't lie with handling the Taliban but with Karzai and the Kabul government.  We can't blame the Taliban for our failure to do that.

Earlier this week, Sarah Chayes, now with the Carnegie Foundation, appeared before the Senate Foreign Relations Committee in hearings on the future of Afghanistan.  Here are some of her observations and warnings:

"As for residual U.S. troops, I don't think 10,000 would make much more of an impact on security and stability in Afghanistan than zero.  My reading of the signals in this town is that zero is a likely bet.  And to be honest, in the absence of an overall policy framework within which the commitment and sacrifice would make sense, I find it hard to argue with that.  But how to get to zero responsibly, without Afghanistan unraveling behind us?

On the 2014 Afghan Elections and the Karzai Fix

"...while we are all discussing the vital importance of a credible [2014] election, moves are being made on the ground to ensure it will be no such thing. Sadly, what matters in Afghan elections as they are currently run is not who can mobilize the most votes, but who can control the process. So President Karzai and his lieutenants in the executive branch are grappling with some of your counterparts over the makeup and duties of the election commission and the complaints body. No surprise, Karzai is winning.

"...U.S. financing and support for the vote must be contingent on Kabul’s adherence to some minimum standards. A truly independent, empowered elections commission whose members are not appointed by the president, for example, and a real complaints mechanism, with teeth. If President Karzai wants to run an election he can control, that’s his right. But not on the U.S. dime, and not on the democratic reputation of the United States.

On Our Irrelevant Obsession with the Afghan National Army

"Much attention has been devoted to the Afghan National Security Forces’ tactical capabilities. There have been improvements -- though vetting and discipline problems were devastating just a year ago. And the ANSF casualty rate has spiked over last year’s, according to Afghan, US and UK officials. Attrition is also up.

"But the technical skills of Afghan soldiers are really beside the point. The real meaning is this. An army -- the best army -- is only a tool in the hands of a government. You can exercise that army, sort of like taking an arm to a gym and lifting weights with it, but if the body to which it’s attached is non-viable, it won’t be able to defend much. That is the fundamental point that keeps getting missed in discussions about ANSF capabilities.

"Don’t look to security structures to provide security amidst political melt-down. The way to wind down U.S. involvement in Afghanistan without the place unraveling behind us is not to focus on military technicalities. It is to take a different approach to the political context.

On Negotiations with the Taliban

"The idea of a single negotiating track with Taliban leadership was never the right approach to the political context -- for several reasons. The ISI [Pakistan Military Intelligence] involvement with Taliban leadership may be complex and fraught, but it is deep and effective. It is likely that the ISI started reconstituting the Taliban in late 2002 -- and I watched them doing it -- with precisely the aim of negotiations in mind. They, like us, presumed an insurgency would end in negotiations, and they wanted to drive us there, and then control the outcome. The aim was to regain a degree of the proxy control over Afghanistan that they enjoyed under the Taliban regime. Now, however the relationship may have evolved, the ISI certainly retains enough hold over Taliban leadership to choose who goes to Doha, and what they settle for. And ironically, we have been practically begging Pakistani officials to play that role.

In other words, we would never be negotiating with autonomous representatives of an Afghan movement in Doha, even if talks started. We’d be talking to the ISI by proxy. That carries a couple of implications. It means we are effectively rewarding Pakistan for the deliberate use of violent proxies as an instrument of national policy. Other countries, like Iran and North Korea, may take notice. And it means that the terms of any deal that might result would likely be unacceptable to most Afghans, because they would entail surrendering too much sovereignty.

Chayes still believes there are political options available for dealing with Afghanistan but it's hard to imagine the American government embracing her views and changing course so radically at this late stage in the game.
Posted by The Mound of Sound at 10:22 AM

The left have moved on to new crusades. The right want to ignore what they said. Canadians have the attention span of a gnat. If it doesn't affect me..

When we hang the capitalists they will sell us the rope we use.


America has all the watches, we have all the time.


We have enjoyed your generosity. Please come again
Your ally, Pakistan.

I made that one up.

Very apt, including your own. The one you attribute to the Talibs, however, I had thought originated with the Viet Cong.

Perhaps, clearly it worked for them as well in the end. Then there's the cost.