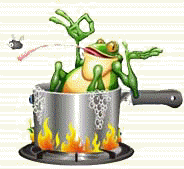 I've said it before but Gwynne Dyer seems to say it better so, here goes:

If you drop a frog in a pot of boiling water, so they say, it will hop right out again. Frogs aren’t stupid. Well, okay, but they’re not that stupid.


However, if you put a frog in a pot of cool water, and gradually turn the heat up under it, the frog will not notice what’s happening. It will happily sit there until the water boils, and it dies.

...human beings have trouble in detecting slow-moving threats. You can watch us failing to do it every day: we persistently ignore the fact that we are running into trouble at a civilizational level, even though the evidence is all around us.

The foundation of every civilization is an adequate food supply: human beings simply cannot live at the density of population that civilization implies without a reliable agriculture. But the supply of good agricultural land is limited, and the number of human beings is not.

You can postpone the problem for a while by increasing the yield of the available land: irrigate it, plant higher-yielding crops, fertilise the soil artificially, use pesticides and herbicides to protect the crops as they grow. But even these techniques have limits, and in many cases we have reached or exceeded them. So we are running into trouble. Why isn’t anybody taking action?

Governments everywhere are well aware of the problem: we are now 7 billion people, heading for an estimated 11 billion by the end of this century, and the food situation is already getting tight. So tight, in fact, that the average price of the major food grains has doubled in the past ten years. But everybody finds local reasons to ignore that fact.

A (still unpublished) study carried out by the World Bank some years ago concluded that India (all of which is in the tropics or sub-tropics) would lose 25 percent of its food production when the average global temperature is only 2 degrees C higher. China would lose an astounding 38 percent, even though most of it is in the temperate zone. And all that is before their underground water sources are pumped dry.

Most governments in the developing countries know the facts, but the short-term political imperative to raise living standards takes precedence over the longer-term imperative to curb the warming. So headlong industrialisation wins the policy debate every time, and we’ll worry about the food supply later.

The developed world’s governments do nothing, because until recently they secretly believed that the catastrophe would mostly hit countries in the former Third World. That would unleash waves of climate refugees, plus local wars and a proliferation of failed states, but the rich countries reckoned that they would stil be able to feed themselves—and their military could hold theother problems at bay.

But what is becoming clear, just in the past few years, is that the developed countries will also have trouble feeding themselves. Part of the problem is that many of them depend heavily on underground aquifers for irrigation, and the water is running out.

...Combine the steep fall in irrigation, the crop losses to wild weather, and the diversion of large amounts of cropland to grow “biofuels” instead of food, and it is not at all certain that the developed world will be able to grow enough food for its own citizens in five or 10 years time. So are the leaders of these countries launching crash programmes to stop the warming, cut down on water losses and end the lunacy of biofuels?

Of course not. The smarter ones just reckon that since their countries will still be rich, they will buy up whatever food is available elsewhere and feed their own people that way. It will be other people, in other countries, who go hungry.

And the slower ones? They’re just frogs.

So, here's the thing.   We know this food security problem is already here.  We know it's worsening and can be a real threat to us in the near future.  So why, like so many other issues, is this being wiped from our political radar screens?  In Gwynne Dyer's words, "We are running into trouble.  Why isn't anybody taking action?"

Don't thank me, Owen. The credit is due Gwynne Dyer. I've written all this repeatedly in the past as others also have but it's useful to have someone widely known, like Dyer, lay it out.

I want every Liberal and New Democrat to look to their party leadership and ask the same question Dyer poses: Why isn't anybody taking action?

What greater responsibility can they have to the country, the Canadian people and grandkids yet to arrive than to come to grips with these issues? Why are they not taking action?

We entrust government with the authority and resources to deal with a host of matters but especially those that threaten our individual and collective wellbeing. Yet as I've complained several times, they wipe these things off their radar screens and act as though they didn't exist.

Owen, read the PostArctica post on the new phenomenon of massive Arctic cyclones that are now arriving in summer, sweeping out hundreds of thousands of sq. kms. of sea ice and drawing in warm water out of the Pacific and Atlantic. This year's cyclone is supposed to hit within the next two weeks.

It's a catastrophe and we're doing absolutely nothing about it. It's just another one of those conversations our political leadership would rather we not have.

Your post, and Dyer's article, Mound, perhaps speaks to our tragic flaw as a species - the inability to see the big picture. While it is true many people have been sounding the alarm about the consequences of climate change for years, as citizens we have not forced our politicians to confront the issue they are so happy to avoid'; because we fear the short-term costs, we refuse to acknowledge the huge long-term price all of us will have to pay.

Lorne, I'm coming to believe we're conditioned not to look. It's so much easier to poke at Harper's flaws than to demand improvements from our own parties. At least it's made me understand at long last Nader's perspective in the Bush-Gore 2000 election.

I would not spend much time worrying about biofuels displacing food crops when the real crunch hits. Farmers will respond to price signals, and as food crops become more valuable, that is what they will plant. I am more concerned about wholesale changes in rainfall patterns, and consequences for many important aquifers. It will take many years, or even be impossible to keep a lot of prime farmland fertile. I think that we are likely to be eating more and more bio-engineered crops, as we are forced to replace natural selection and adaptation with accellerated and forced adaptation. Surely there will be consequences, as we are forced to retire great farmlands and replace them with sub-optimal engineered crops in marginal land. I guess what I am saying is that even with rapidly changeing environmental conditions, humanity and civilisation will survive, and will probably not live all that differently from how we all live today.

Lorne..."I'm coming to believe we're conditioned not to look." That's partly the problem. It is difficult to understand how people can go on without giving the environment a second thought. It is willful blindness mostly because most people don't have 21 century innovation nor do they ask their governments what their 21 solutions are. What are the application of new solutions that meet new requirements. Recently, I wrote a letter to the editor regarding the thought the terrible flood in Alberta was the "100 year flood". I mentioned if the oceans continue to rise, it will back rivers up and, if clear cutting of the forests continue across the country,water doesn't have any place to go except crashing down onto flat land increasing river flow and flooding. If oceans rise and flood coast line, it will not affect us...we live inland is what most people believe in Alberta. My letter has not been published. Why? It is too much for this small minded uncaring community to get its head around. All while our governments pretend nothing is happening regarding the environment, so will local people carry on with their willfull blindness.

That should have been MOS not Lorne...sorry Lorne.

I think you're unrealistically optimistic, Matt (BGB). I suppose humanity and civilization will survive but how much of it and in what form? We're already far past sustainability as the collapse of global fisheries alone attests. Other examples can be seen from satellites - deforestation, desertification, the loss of glaciers and sea ice, the drying up of tributaries of major rivers such as the Amazon and there's plenty more.

As a species, mankind already consumes an entire, annual supply of our planet's biomass, by early September. This biomass we depend upon for production of food and other consumables and as a sink for the pollution from our consumption and production. Check out the Global Footprint network for a detailed explanation of their research and findings because it contradicts your belief that we'll just switch to different crops and be just fine.

I wish you could convince the U.N. Food and Agriculture Organization that we're not in immediate and dire straits. They have declared our world to have entered a state of permanent food insecurity. They see the world much differently than you do, Matt.

Experts have announced that Canada needs to invest a trillion dollars in reinforcing, upgrading and replacing essential infrastructure. Where do we find that capital much less the public and political will to raise it?

How do we wean ourselves from our addiction to growth given that we have long passed the point of sustainability? I have been delving into "steady state" or "full earth" economics over the past few weeks and, while there's a compelling case to be made for organizing ourselves and re-aligning our economies to conform to the limits of our environment, I cannot begin to imagine finding the will to act, in time, on our own terms.

Closer to home, what will happen when large numbers of Americans migrate out of the southwest or retreat from coastal inundation from sea-level rise? The United States is broke at the federal, state and municipal levels. How are they to accommodate the economic seismic shock of internal displacement? They're already adopting traits of Third World states.

Sorry, Matt, but I think you've succumbed to wishful thinking.

@ Anyong. Did you really imagine a letter such as yours would get published? The sort of discussion you invite is unwelcome.

MOS...my letter was published today and sadly edited. It was disjointed. So what next...just continue and ask why my letter wasn't published in its entirety and why the attitude, the writer is a person of no importance, influence or power.