And there wasn't so much as a splash to mark Chris Woodcock's departure from Stephen Harper's nest of bent vipers, officially known as the PMO or Prime Minister's Office.

This time it was Harper's Director of Management and Issues or Issues Management which is a title that suggests nothing so much as a "fixer", the very role in which ex-con Bruce Carson served Harpo until he was outed in a scandal.

Woodcock is another senior PMO staffer fingered by the RCMP as having prior notice of former Chief of Staff Nigel Wright's 90-thousand dollar, under-the-table cheque to Senator Mike Duffy, the Cavendish Cottager.

Woodcock's departure was not announced but appeared, according to CBC, in "an electronic directory of government employees that was updated some time between Wednesday and Thursday."  Now you see him, now you don't.

"We don't comment on staffing," Julie Vaux, one of Harper's press secretaries said in an email to CBC News. (really, since when?) Wright resigned from his post as Harper's chief of staff a few days after it became public that he cut a cheque for Duffy, who had committed to repaying his housing and travel allowances.

Harper says he did not know about the cheque and thought Duffy was paying the money back himself.

The court documents indicate that Wright's lawyers told the RCMP that Wright informed three other people in the PMO about his intention to write the $90,000 cheque: Woodcock, Benjamin Perrin, Harper's former legal advisor, and David van Hemmen, an assistant to Wright.

So that makes Wright gone, Perrin gone (he left first but is wanted for questioning), Woodcock gone and van Hemmen possibly eying the exit.

I wonder if Woodcock voluntarily walked the plank or if he did it at swordpoint.   Maybe I should send in a resume.   Just in case.

The world is closing in on Sideshow Steve.  He's now down to his former valet as his current Chief of Staff, this guy, who might just be responsible for the "enemies list" scandal: 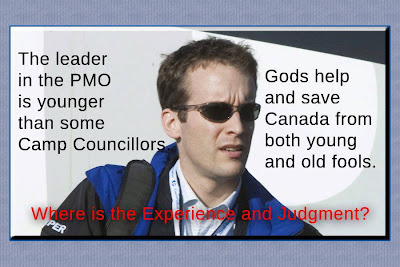 (courtesy of RoboFraud Canada)
Posted by The Mound of Sound at 12:56 AM

.. the smelly ballad of Stephen/Ray ..

We both know it goes far back .. even prior to the Cadman Affair .. That was an early look at what these two would do.. to gain political power .. and when exposed, we saw the level of denial .. or better said, just how empty they were, ethically .. pathological liars and deniers with binders of litigators ..

Yes.. some day we'll look back at some seething sort of virtual legacy unreality.. Where apologists, historians, investigators try to collect anything factual or close to the truth about these two and the other more junior pus sacks from the PMO, the Harper Party and all their wealthy lawyers.. and the sleepy sheep herd of MP's

So Woodcock is just another quisling scum.. not there for Canada.. just his personal slice of Canada.. and his bosses are after the entire pizza ... which must be how they perceive this country.. something you get via the phone .. ordered up & delivered robotically.

The cover ups are spectacular .. Are we in Canada being played for fools ?

As long as they really think we're stupid, the charade will continue, salamander.

The question is: Are we?

Well you know the saying '...like rats off a sinking ship...' Hey all you con's with a conscious leap in the waters nice and a swim away from the black fetid plundering HMS HARPER will do your country good. Remember con's don't ask what your country can do for you but ask yourselves what can you do for your country? Go ahead take the plunge it will feel much better than underneath the weight of that one man Harper dictatorial band Captain Bly, I meant sly or is it slime. You will actually be able to speak your mind and not his, a first and we the voting public will welcome it.

But I have always thought that PMO officially stands for Prime Minister's Orifice. I thought that was why the stuff that is coming out of that place stank so much, no?

The comparisons with Harper and Nixon are even more apt now. The apparent paranoia and hatred for their own country's respective Institutions (in Harper's case, Elections Canada, the Courts). Then there are the apparent cover ups (alleged Duffy-Wright Feb. 20 memo agreement)and now the long enemies' list (as per Andrew Coyne's article in the Nat. Post yesterday).

As someone joked: even the cleaners at the PMO seemed to know about the Wright payoff, but not the PM (which incidentally, I have also always thought of standing for Piano Man).

No siree, the Piano Man was just playing the tunes to which everyone in his brothel had to dance to, eh? :)

So, Guy Giorno is Nigel Wright's lawyer...sweet. They deserve each other. Wright shouldn't even have been cleared to work in the PMO. Something about conflict of(or appearance of-- whatever happened to that quaint little notion?) interest. They're crooked, lying, thieves who belong in prison, even more than many who are there.

This sort of thing is what happens when Canadians are complacent when it comes to decisions that define expectations, granting of power, or verifying the performance of politicans.

@ Linda - Giorno hasn't been acting for Wright in the RCMP investigation. That's been Pat McCann. I don't know that Giorno is capable of handling Wright's problems.

Harper's PMO is vital to his functioning. Yet it's becoming increasingly dysfunctional. When your Chief Counsel, Chief of Staff and Director of Issues Management all leave abruptly and under a cloud, it's hard to recover. Look at the neophyte sycophant Harper chose to replace Wright. He might as well have found someone from the kitchen staff.

And at this point where would Harper find any first-rate accomplished individual ready to set aside their career to serve in his shakey PMO? He'd be better off working a bulk deal with a temp agency.

I hear body-guards are held in such high esteem by Harper, he promotes them to be ambassadors. I wasn't inferring that he 'needs' one for his actions in the PMO debacle, so take it easy robocons.