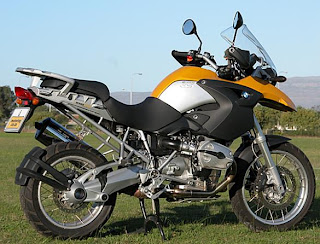 No posts today from me.  Time for some long overdue moto-photo therapy.  The moto part is my now 8-year old BMW R1200GS, "The Beast":


It is widely considered the best touring motorcycle ever.  Not the most comfortable, the Hondas and Harleys, but by far the most capable.  I bought this bike, sight unseen, based on the "Bike of the Year" reviews it  gathered in 2005.  I showed up at the dealership in Eugene, Oregon and I'd never even seen one.   There, front and centre in the showroom was The Beast.  It was HUGE.  I briefly thought about turning around and walking straight back out but then I remembered I had put a deposit on it so...  well, you can imagine the rest.

BMW sets these bikes up for a 600 mi./1000 km. break-in.  The bike then comes back for a complete fluid change and check-up.  By the time I finished all the introduction lessons and all the paper work it was nearly noon.   The dealer asked when I wanted to book my appointment for the 600 mile service.   I had to get back to Vancouver Island so I said to have a service bay cleared for me at the same time tomorrow.

I headed out to the Oregon coast road and, around supper time, I found myself well down into California.   Back to Oregon, Brookings, where I found I just needed to ride back to Eugene to have my 600 miles on the clock.

That bike has been my year-round ride for going on eight years now.  I have logged a good many miles on it.  I have ridden The Beast from Vancouver Island to Ottawa and back.   It has taken me into the far north.  I have carved every corner on the Pacific Coast Highway on it six times.  It has taken me through deserts in the American southwest and Mexico.   The Beast took me from breakfast in Lethbridge, Alberta to a lovely dinner (yes, the formal diningroom was still open) in Kenora, Ontario in one day.

You're possibly familiar with the Mighty GS (Gelande/Strasse) from Ewan McGregor and Charlie Boorman's documentary series, "The Long Way Round."  On video it seemed almost too good to be true.  It seemed good enough that I changed my plans from buying the big KTM and went for the BMW instead, a  decision I have never for a moment regretted.

The beauty of the GS is that it does so many things so well that, when I was a twerp of 16 or 18, we had to do ourselves and often not very well at all.   Throwing a leg over that machine is truly like taking 20-years off your age.  It's that good.

I wish we made more things like the BMW GS, things that allowed us to revisit what we once were, what we long ago could do and were willing to try.

I do have a car, a high fuel-efficiency VW diesel Golf.   But the two or three days a week I actually drive anywhere I have to choose between car or bike.   Far more often than not, The Beast wins.

Nice bike and a pretty good story. Have fun.

Keep 'er shiny side up!

Happy trails to you, Mound.

Have a great time Mound!

Mound, I believe you need a break. I hope you will return all refreshed and relaxed. Have a great trip.

Have a great trip Mound, be sure to include the cradle of free enterprise on your itinerary. :))