Another Discussion We Won't Be Having 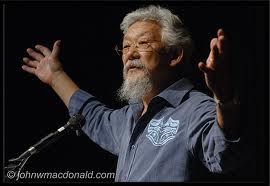 Suzuki contends that climate change is reducing the amount of space and resources we have to support our existing population.  The thing is, he just might be right.

Here in British Columbia, farmers are reporting that climate change impacts are already shortening the province's growing seasons.  British Columbia is very susceptible to climate change.  We have transitioned out of normally cold winters which has allowed the infestation of our forests by lodgepole and mountain pine beetles usually kept in check by freezing spells.   Now vast swathes of forests are dying. On Vancouver Island, University of Victoria researchers report that our jewel, Strathcona Park, is going to be the most affected by climate change in the province. 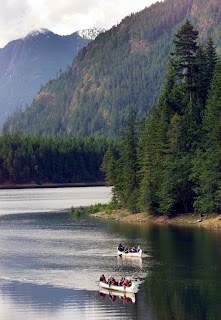 Vancouver Island marmots and the heather alpine meadows they live in are most at risk, said lead researcher Keith Holmes.

“[The ecosystem] is going to be less seasonal and more like a coastal rainforest,” he said. “It’s good for plant productivity but not these sensitive species.”

Strathcona, the oldest provincial park in B.C. and the largest park on the Island at almost 2,500 square kilometres, now has a dry mountain ecosystem, but that’s projected to change to a more lush coastal rainforest ecosystem with more plant life in the next five decades.
The treeline — how high up a mountain trees can grow — is expected to move higher, eliminating the heather meadows. Trees that would normally stop growing at the 200-metre level would be able to survive at the 400-metre mark.

With the onset of cyclical and sustained droughts and floods of increasing intensity and duration, it's a safe bet that Canadian agriculture is going to be affected negatively across the country.

Suzuki, always a lightning rod for criticism from the far Right, has drawn outrage from Jason Kenney who denounced him as a xenophobe.  Still he's opened a subject we need to explore and discuss.   What sort of a Canada do we want for the future, how are we going to preserve what we have for our grandchildren and their kids, what do we need to do now for them?
Posted by The Mound of Sound at 11:09 AM

Suzuki, as usual, sees the big picture, Mound. Kenny can't see the nose on his face.

Economist Jeff Rubin and environmentalist David Suzuki might seem an unlikely pairing. But they've been touring Canada together, talking about the natural limits to growth from their very different perspectives. We listen in as they try to convince a Calgary audience that we've already exceeded the capacity of the planet.

Jeff Rubin is a former Chief Economist and Chief Strategist at CIBC World Markets. His book, The End of Growth is a follow-up to his earlier book Why Your World Is About To Get A Whole Lot Smaller.

David Suzuki is a geneticist, environmentalist, broadcaster and the co-founder and chair of the David Suzuki Foundation. He has written over 50 books, including The Legacy: An Elder's Vision for Our Sustainable Future.