What Do Toronto, Calgary and Angkor Wat Have in Common? 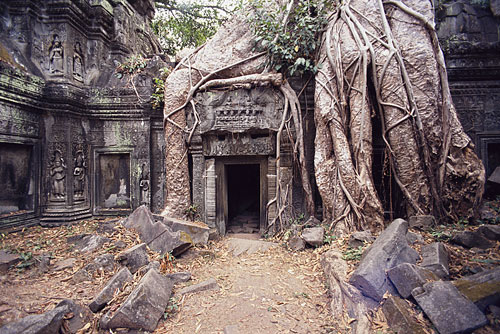 What do Toronto and Calgary have to do with the mysterious Cambodian city of Angkor Wat?   More, perhaps, than we would care to imagine.

The city of Angkor Wat, Cambodia, was a vibrant, growing metropolis in the late 17th century. Angkor was the New York, Paris or Rome of its time. At its peak from the 9th to 17th centuries AD, no one could have imagined any threat to this Khmer city-state. Yet, Angkor collapsed almost totally in the 17th century, and the reasons behind its demise offer an important lesson for today’s cities.

Angkor was built on a vast transportation network: canals acted substantially like freeways. The metropolis grew by expanding its network of canals from the central city to form a vast complex of suburban satellites. Ankgor grew exponentially as internal wealth and power increased. The waterways allowed goods and people to move well beyond the central core of the city.

But as Angkor continued to grow, its waterways became more fragile and vulnerable. Rain and other small but severe weather changes occurred, and the system began to crumble.

Angkor expanded in a mild weather period. So, Angkor policymakers assumed this weather regime would continue forever and thus built their canals with few water catchments and earthen dams.

Today’s sprawling cities expanded in a period of mild weather too, with no anticipation that seas might rise or energy resources could be depleted. Angkor and modern cities resemble one another in that they were built to survive in only the most benign weather regimes. The roads, sewers and the like of the modern suburb are based on an assumption of mild weather and cheap energy. Recent events like Hurricane Katrina in New Orleans and subsequent Midwestern intense storms show how poorly modern infrastructure performs in extreme weather.

Ours is a young country, not properly settled for more than a century.  We came to Canada in a period of mild, benign weather.  Nobody knew, when we settled the prairie, that it was an unnaturally wet period.   No one had any idea that this region had a history of megadroughts lasting up to 60-years.   The absence of tall trees and the prevalence of prairie grasses might have given a clue but we didn't understand that at the time.

Like the ancient Cambodians, we built our cities to conform to this mild climate.  We had no experience of and couldn't foresee the extreme weather events of an altered climate in the 21st century.  We didn't plan our cities to accommodate these impacts.  We didn't build our infrastructure to withstand them.   And now, like Cambodia's 17th century rulers, we're going to have to decide what, if anything, to do.

The default option is to do nothing.   Of course we won't simply walk away as did the inhabitants of Angkor Wat.   No, we're more apt to just look the other way, to deny as much as possible and to delay as long as possible in desperate hope of some easy, quick, miracle solution down the road, eventually.
Posted by The Mound of Sound at 11:14 AM

Suburbia seems to me to be an incredibly inefficient use of resources. I think we will have to design more communal living spaces, as impervious as possible to changing natural conditions, if we want human civilisation to survive on a large scale.

The Chinese 'Hakka' might be a good starting point:

As has been the case for sometime now, Mound, we are hobbled by the short view.

John Kenneth Galbraith used to say that, when it came to markets, the public's long term memory lasted about three decades -- long enough for the next snake oil salesmen to take them to the cleaners.

Few people these days have any environmental long term memory.

Anon, I don't know that walled mini-fortresses are a good idea although they might do the trick in some post-apocalyptic, "Blade Runner" sort of world.

You're right, Owen, and we place ourselves and our society at risk when we discard our long-term memory.

Jared Diamond in "Collapse" writes of this very thing as 'creeping normalcy' or 'landscape amnesia.' In the latter instance he notes that few of us can recall how different our surrounding landscape looked 50-years ago. Just return to a once familiar spot you haven't seen in decades and you'll be struck by this sometimes quite uncomfortable feeling that what you once knew no longer exists. Had you remained there, however, it would be the 'same old place' to you.

My parents built a lovely family home on the water. Other than a few neighbouring homes it was a pastoral area surrounded by woods and farm fields. When I went back after an absence of 15-years the woods and farm fields were gone, replaced with a hive of mega-houses, each perched on small lots just big enough to bear their weight.

This phenomenon, in Diamond's view, is one of the forces that drives 'irrational failure to try to solve a perceived problem.' It deprives us of the true measure of the problem because we only see it in the context of recent memory. Even when that recent memory is, in the greater picture, abnormal, it is treated as normal. Couple that with a healthy dose of denial and you have the recipe for collapse.

about city of Angkor Wat i never have any chance to visit it but here i red a very precious info about it looking forward more info to guide travelers for it i belong to airport taxi toronto company.