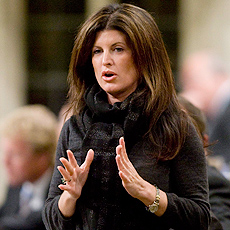 This is no time to be cavalier about your life insurance premiums.  In case you hadn't noticed, Rona Ambrose, the talking hairdo, has been rewarded for years of incompetence by being named Canada's minister of health.

When Ambrose was first appointed EnviroMin, Hill Times revealed that after eight months in the job, she still hadn't been briefed by here department's science types on global warming:

Ms. Ambrose hasn't bothered to get a briefing from her department on the science of climate change. HT spoke with an unnamed official of her department who said Ronnie hadn't been briefed by here ministry's scientists who specialize in this area, adding, "It's shocking, isn't it?"

We all know how well she subsequently did on the F-35 file as understudy to Elmer's dim boy, Peter MacKay.   Now, she's being entrusted with the responsibility to safeguard our health.  What a gift to hypochondriacs from coast to coast. 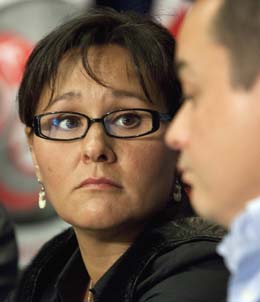 What makes the Harperites truly dangerous is their mind boggling stupidy. There aint't no cure for studpid, and it's not covered under the Canada Health Act.

We have let the most defective members of society rise to the top of the food chain. In Canada and elsewhere in the western democratic nations it seems 30% of the electorate are so incapable of critical thought and self preservation that they can be manipulated at will by said defective members. We used to have some checks and balances against the depravations of sociopaths in power. We don’t anymore. We haven’t for at least a generation and a half. When the young finally flip, it is going to get really, really messy. Frankly, I hope to see that arrival. We are seeing that in the rest of world already. When you have nothing, you have nothing to lose. I give a generation and the Western societies will erupt like nothing we see currently. Of course, just to be optimistic :), we could all die in resource wars...

Theo, you might be right about the inevitability of widespread youth unrest. I don't see that we're offering them any choice beyond submission to some 21st century feudalism.

I have a hard time making it through each day now. The only respite I have is humor. All I do now is try to make people smile through my art. I don’t know that any of the stuff that I do makes any difference, but it’s all that I have.

I agree with you the inevitability of widespread youth unrest. I don't see that we are giving chance them any choice beyond submission to some 21st century feudalism.

You have written a great post about best life insurance premiums.

Auto insurance is a contract you purchase to protect your Car in the event of your Accident. It provides money for them to use for any purpose. Auto Insurance in Houston Texas have low premiums pay for the accident benefit of your Car insurance policy after the accidential incident.

I’m soooo happy through your blog posts, and waiting for the upcoming posts.best term life insurance for seniors

This is an informative blog by which I have got that info which I really wanted to get. automobile insurance rates