Ah, southern Germany in May.  When I heard a buddy was going back to his parents' homeland for an aunt's 80th birthday, I told him of the glories of the south in May, especially the spargel season.  It's a white asparagus grown throughout Bavaria and elsewhere that, when fresh, is astonishingly good.  Munich, Baden - life is good.

Turned out I was wrong.  It was cold and damp, wet to be more accurate.   The place, along with much of central Europe was beset by heavy flooding.   My friend gave his aunt a kiss and headed off to seek refuge in Rome.

Things have changed over the course of thirty years.   Flooding is the order of the day from Britain to eastern Europe.  New research finds that's the way it's going to be for the future.

Heavy and prolonged rainfall will cause both more frequent and more severe flooding across the UK and the rest of north-west Europe as the atmosphere continues to warm, say British and American scientists

The study of these "atmospheric rivers", published in Environmental Research Letters, pins the blame for the increasing flood risk firmly on man-made climate change and says the same problem will afflict other parts of the planet. 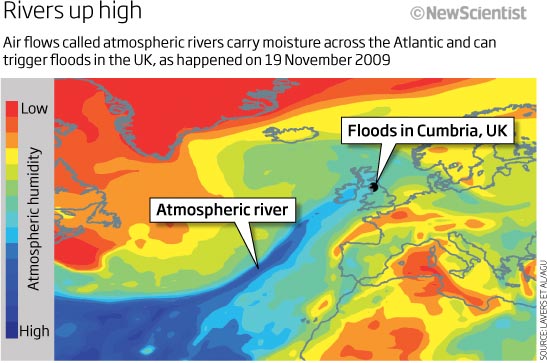 The researchers describe how atmospheric rivers carry vast amounts of water vapour around the Earth, delivering heavy and prolonged rainfall, particularly to mountainous areas. They were responsible for the protracted winter and summer floods in the UK in 2012, which caused an estimated $1.6 billion (£1 bn) in damage.
In a warming world the atmosphere can carry more water and the research showed that the rivers, typically running a kilometre above the Earth, 300 kilometres wide and thousands of kilometres long, would become larger and capable of delivering even bigger quantities of prolonged rainfall.

An example of their potential danger is the atmospheric river that caused the severe flooding on 19 November 2009 over north-west Britain. As it approached the coast it was transporting a moisture volume 4,500 times the average gauged flow of the river Thames through London.


In California, where atmospheric rivers (ARs) have already been assessed, the climate models predict that the number of years with these features will increase. To discover what could happen in Europe the models were tested against the known flooding events between 1980 and 2005, and the researchers found that they could accurately simulate what actually happened.

This gave them confidence to test what would happen in the future. All the models showed that with more greenhouse gases emitted by humans there would be a doubling of the number of atmospheric rivers later this century compared with the 1980 to 2005 period. Most of these events occur in the winter, but in a warmer world the danger period is extended.

Because of the way the warmer atmosphere is able to carry more water and deliver much higher rainfall totals, the potential for far worse floods from each of these rainfall events is much increased.

One of the saddest aspects of this, Linda, is the precious architecture that is endangered. Since the Mesopotamians at least civilizations have been built in valleys and along waterways. From Britain to eastern Europe these new floodways are dotted with centuries-old villages, roads and bridges.

The floods are so destructive of this vintage architecture that was constructed for an earlier time that some villages in Britain have already declared that they cannot withstand one more major flood event.

Insurers, being in the business of making money not losing it, are exiting this market. Governments can provide some disaster relief but for how long?

I have been focusing lately on discussions we should have been having but haven't. This is one of those discussions our government doesn't want to have with us.

its circular. I'm sure the dinosaurs went through the same thing.

I don't know about that, Willy, but I've read it has been estimated that every drop of water on earth passed through a dinosaur at least four times during their reign on the planet. Go to the tap. It's vintage dinosaur pee.

By all accounts, when the dinosaurs went it wasn't their fault. If it weren't for an astronomical disaster they might still be ruling the planet.
Hard to say if we'll be able to make similar claims.