The Heat Turns Up on The Land Down Under 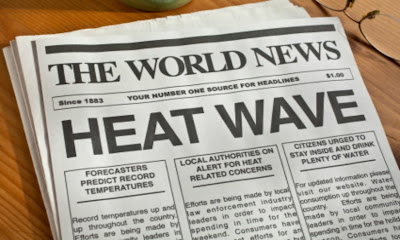 To most Canadians, Australia is synonymous with "hot."  Well it's going to get hotter a lot more often for the Aussies.

A University of Melbourne study predicts that Australia's devastating heat waves will increase about five times and they're blaming global warming for causing much of it.

Sophie Lewis and David Karoly report in Geophysical Research Letters, a journal of the American Geophysical Union, that they used climate observations and more than 90 climate model simulations to deliver their verdict, and to highlight the unexpected nature of the events of the first months of 2013, the hottest in the country's observational record.

Australians are used to summer heat, drought and periodic bush fires as part of the continent's natural cycle, and these are often linked to a Pacific Ocean temperature phenomenon known as El Niño, dubbed "the Child" in Peru because it tends to occur around Christmas time.

But there was no El Niño: if anything, the ocean heat was turned down a little in a counter phenomenon called La Niña. So the extreme heat, catastrophic flooding and devastating bushfires early this year - the southern hemisphere summer - were certainly not expected.

"This extreme summer is not only remarkable for its record-breaking nature but also because it occurred at a time of a weak La Niña to neutral conditions, which generally produce cooler summers", said David Karoly. "Importantly our research shows the natural variability of El Niño-Southern Oscillation is unlikely to explain the recent record temperatures."