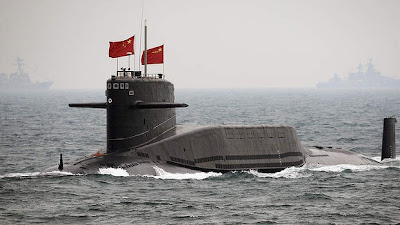 They're called "Boomers," submarines capable of launching nuclear armed ballistic missiles.   The Americans and the Russians have had them for decades, the French, Brits and Chinese too.

Western navies used to spend massively on anti-submarine warfare ships and aircraft designed to detect enemy subs before they could get into position to fire their weapons at our cities.  We even worked on ways to get at them beneath our Arctic ice cap.

But then something happened for which we really didn't have a solution.   The submarine missiles got better.  Instead of the intermediate-range missiles they developed true, intercontinental ballistic missiles.   That meant the submarine could hide just as it did before only it could hide safely within its own home waters and still hit targets many thousands of miles away.   And guess who just joined that club?  China.

China's military has the world's "most active and diverse ballistic missile program," with an expanding inventory of nuclear warheads that can reach the US, according to a Pentagon intelligence report.

The arsenal includes a new submarine-launched JL-2 ballistic missile that will "for the first time allow Chinese" submarines "to target portions of the United States from operating areas located near the Chinese coast," according to the new assessment by the National Air and Space Intelligence Centre.

China is expanding its missile programs as the Pentagon pursues a policy of putting more emphasis on US forces in the Asia-Pacific region. Some of China's weapons are "specifically designed to prevent adversary military forces's access to regional conflicts," according to the report.

What did we expect, especially after Obama's "pivot" to Asia?  The Chinese are students of history.  They can read, especially about things like Operation Chimichanga, America's full-dress rehearsal of a stealth first-strike against Chinese air defences.

You want to put a country in your crosshairs, especially an ascendant economic and military superpower like China, and you can anticipate they'll take you seriously and react to your threats.  They remember that the Japanese staged full-dress rehearsals of their own first-strike attack on Pearl Harbour and now we're doing the same thing for a stealth, first-strike attack against China.

These aren't defensive war games like NATO's Autumn Forge exercises we used to stage in Europe.   Those were practice to defend Europe against a Soviet attack.  We're not practising defending any more.  We're practising how we'll launch a devastating first strike, surprise attack of our own.

China, by all accounts - I mean, all - has never practised a first-strike against us.  It has never developed its forces for that sort of thing.  We practice attacking them.   And then we sound the alarm when China begins developing weapons that might survive our best efforts at a surprise attack and thereby deter us from launching such an attack.   How dare they?
Posted by The Mound of Sound at 10:30 AM

Wow! We, the humankind are getting better and better how to destroy the life on this planet. Now that is 'real evolution'.

Yes, how dare they while sit wringing our hands and panic when China will attack us. What drival!