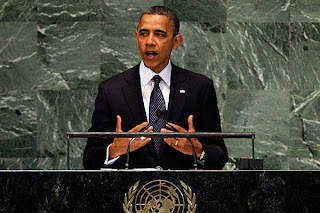 Everybody is getting candid all of a sudden.   Maybe the new Pope, Francis, is setting an example.  At the United Nations, Barack Obama actually cut Iran a little slack, telling the General Assembly that the US gave Iran plenty of reason to remain suspicious back in 1953 when the CIA engineered a coup of Iran's democratically elected government.

The president, speaking a the United Nations general assembly in New York, acknowledged that the mistrust between the two nations had "deep roots", including "America's role of overthrowing the Iranian government in the Cold War".

He said: "I don't believe this difficult history can be overcome overnight. The suspicions run too deep." But resolving the nuclear question could serve as a first step down a long road, he said. 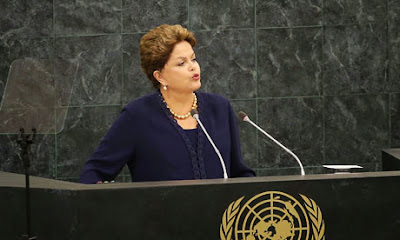 But it wasn't America past but America present, Barack Obama's America, that was on the mind of Brazilian president Dilma Rousseff.   She used her time before the General Assembly to launch a blistering attack against Washington and the NSA for spying on other countries and accusing America of violating international law.

"Personal data of citizens was intercepted indiscriminately. Corporate information – often of high economic and even strategic value – was at the centre of espionage activity.

"Also, Brazilian diplomatic missions, among them the permanent mission to the UN and the office of the president of the republic itself, had their communications intercepted," Rousseff said, in a global rallying cry against what she portrayed as the overweening power of the US security apparatus.

"Tampering in such a manner in the affairs of other countries is a breach of international law and is an affront of the principles that must guide the relations among them, especially among friendly nations. A sovereign nation can never establish itself to the detriment of another sovereign nation. The right to safety of citizens of one country can never be guaranteed by violating fundamental human rights of citizens of another country."

"The arguments that the illegal interception of information and data aims at protecting nations against terrorism cannot be sustained. Brazil ...knows how to protect itself. We reject, fight and do not harbour terrorist groups," Rousseff said.

"As many other Latin Americans, I fought against authoritarianism and censorship and I cannot but defend, in an uncompromising fashion, the right to privacy of individuals and the sovereignty of my country," the Brazilian president said. She was imprisoned and tortured for her role in a guerilla movement opposed to Brazil's military dictatorship in the 1970s.

Wouldn't it be great if Canada had a prime minister willing to stand up on his hind legs in defence of the privacy and security of the Canadian people, someone willing to fight back against Washington's pervasive spying?  But we don't have that sort of prime minister and we won't no matter who gets that office in 2015 either.
Posted by The Mound of Sound at 10:10 AM