Brace Yourself. The Next Bout of Denialism Is Already Showing Up 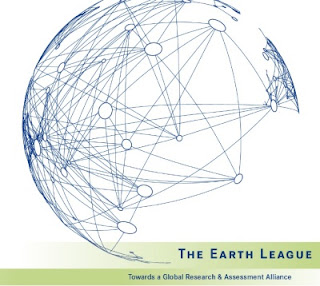 A neat refresher piece on the Five Stages of Denialism is available from The Guardian.  They're all being dragged out again - all of them - in advance of the release of the next IPCC report.  Here they are in a nutshell:  1. Deny the Problem Exists; 2. Deny We're the Cause and Deny the clear Scientific Consensus; 3.  Deny It's a Problem; 4. Deny We Can Solve It; and, 5. Claim It's Too Late for Anything but Adaptation.

Meanwhile a new science group, Earth League, has fired an opening salvo of their own.  Earth League is made up of representatives of some of the most prominent scientific and academic institutions working on climate change.

Earth League has just released a statement that strikes into the very guts of the contemporary denialism industry and warns clearly that if we let them prevail we are facing a real likelihood of triggering the 6th Great Extinction of life on our planet.

The signs on the climate wall as expressed by the accelerated melting of Arctic sea ice and by the retreat of the overwhelming majority of glaciers worldwide are there for all to see.

Yet this is just the beginning: We have strong evidence (as documented in the 4th IPCC Report from 2007) that a 2°C warming of the planet would imply major disruptions in the world’s ecosystems, high risks to rain-fed agriculture in tropical regions, and sea-level rise threatening the very existence of low-lying island states and coastal regions.

...it is critical to realize that global warming might not stop at the 4-degrees level. Powerful feedback processes that very likely will push the warming even higher (such as methane release from thawing permafrost domains and peat bogs on land as well as from huge frozen layers on the sea floor) could be set into irreversible operation. And, 4-degrees planetary warming means some 8-degrees change close to the Arctic, which will cause even larger impacts on the Eurasian and North-American land mass and the surrounding seas. So, much depends on the answer to our first question, is a global mean temperature rise by 4°C possible or even likely? Unfortunately, the latest research supports a clear “yes” again.

Although climate science only tells us what might happen and not what to do about it, we authors feel that this is an unacceptable prospect. Nations go to war, implement mass vaccinations of their populations, and organize expensive insurance and security systems (such as anti-terror measures) to address much fainter threats. However, our societies seem to be willing to impose immense risks on future generations.

There are some who say that humanity could not cause a 4-degrees warming by any conceivable means; others hasten to declare environmental defeat by maintaining that the international climate-policy goal of confining the planetary warming to less than 2 degrees is already a lost case. Yet the scientific evidence is just what it is. And it tells us that both these speculations are wrong. Regardless of the sometimes made (erroneous) claim that global warming has already stopped, evidence is that once well-known impacts from El Niño, volcanic aerosols and solar variability are removed from the observations, the warming trend of the ocean-atmosphere system is unbroken; and that it will continue (potentially towards 4°C) unless serious mitigation action is taken. That global warming continues unabated over the last decade is confirmed by ocean measurements. Ninety percent of the additional heat that the Earth system absorbs due to the increase in greenhouse gases is stored in the oceans, and the global array of thousands of scientific measurement robots in the oceans proves that they keep heating up at a steady pace. Meanwhile satellites show that sea levels also keep rising steadily.

Also, there is ample evidence that we can hold the 2°C-line indeed. The recent “Global Energy Assessment” shows that a rapid world-wide transformation to sustainable energy access for all without fossil fuels is technically and economically feasible.

In 2015, the global community wants to seal a ground-breaking climate agreement and also replace the rather conventional Millennium Development Goals by integrated Sustainable Development Goals. Two years is a very short time for creating the necessary political momentum. Yet the scientific consensus has grown exceedingly strong to warrant action.