What Now For the Weiner? 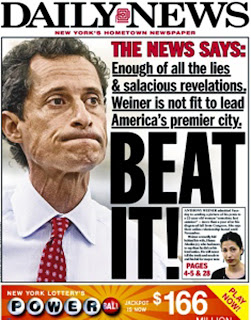 From the presumptive winner to fifth-place finisher with just 5% of the primary vote, Anthony Weiner's political career is over.  He's just another old perv who can't stop sexting young women, trying to entice them with phone camera pix of his junk.

So what does Weiner do now?   His B.A. in poli-sci probably won't be a lot of help on the streets of New York.   He committed the ultimate political crime - he made a joke of himself, twice.

I expect the next thing in Tony's future is a divorce.  When the dust settles he'll probably still think he's the victim.
Posted by The Mound of Sound at 11:13 AM

His parting speech: Giving middle finger to a reporter. They say politician flip-flop but you can say one thing about 'Weiner ___'he is steadfast.