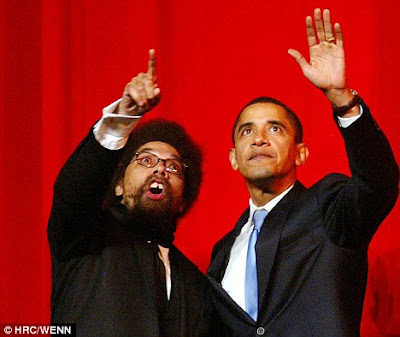 Chris Hedges rallies to the defence of black intellectual Cornel West and, in the process, issues a bill of indictment against Barack Obama for his relentless assault on America's black prophetic movement and democracy itself.

“Jeremiah Wright was the canary in the mine,” West said when we met a few days ago in Princeton, N.J. “The black prophetic tradition has been emptied out. Its leaders have either been murdered or incarcerated. ... A lot of political prisoners who represent the black prophetic tradition [are] in jail. They have been in there for decades. Or we have leaders who have completely sold out. They have been co-opted. And these are the three major developments. With sold-out leaders you get a pacified followership or people who are scared.”

“The black prophetic tradition has been the leaven in the American democratic loaf,” West said. “What has kept American democracy from going fascist or authoritarian or autocratic has been the legacy of Frederick Douglass, Harriet Tubman, Sojourner Truth, Martin King, Fannie Lou Hamer. This is not because black people have a monopoly on truth, goodness or beauty. It is because the black freedom movement puts pressure on the American empire in the name of integrity, decency, honesty and virtue.”

The tradition is sustained by a handful of beleaguered writers and intellectuals, including Glen Ford and his Black Agenda Report, James Cone, Carl Dix, Bruce Dixon, Boyce Watkins, Yvette Carnell, Robin Kelley, Margaret Kimberley, Nellie Bailey, the Rev. Michael Pfleger, Maulana Karenga, Ajamu Baraka and Wright, but none have the public profile of West, who is routinely attacked by Obama’s black supporters as a “race traitor,” the equivalent of a “self-hating Jew” to hard-line supporters of Israel. It is understandable why this tradition frightens Obama. It exposes him as the ideological heir of Booker T. Washington, a black accommodationist whose core message to black people was, in the words of W.E.B. Du Bois, “adjustment and submission.” The wide swath of destruction Obama has overseen on behalf of the corporate state includes the eradication of most of our civil liberties and our privacy, the expansion of imperial war, the use of kill lists, abject subservience to Wall Street’s criminal class and the military-industrial complex, the relentless persecution of whistle-blowers, mass incarceration of poor people of color and the failure to ameliorate the increasing distress of the poor and the working class. His message to the black underclass in the midst of the corporate rape of the nation is drawn verbatim from the Booker T. Washington playbook. He tells them to work harder—as if anyone works harder than the working poor in this country—and obey the law.


“Obama is the highest manifestation of the co-optation that took place,” West said. “It shifted to the black political class. The black political class, more and more, found itself unable to tell the truth, or if they began to tell some of the truth they were [put] under surveillance, attacked and demonized. Forty percent of our babies are living in poverty, living without enough food, and Obama comes to us and says quit whining. He doesn’t say that to the Business Roundtable. He doesn’t say that to the corporate elites. He doesn’t say that to AIPAC, the conservative Jewish brothers and sisters who will do anything to support the Israeli occupation against Palestinians. This kind of neglect in policy is coupled with disrespect in his speeches to black folk, which the mainstream calls tough love.”

“He is a shell of a man,” West said of Obama. “There is no deep conviction. There is no connection to something bigger than him. It is a sad spectacle, sad if he were not the head of an empire that is in such decline and so dangerous. This is a nadir.  ...But now if you criticize Obama the way Randolph criticized Garvey, you become a race traitor and an Uncle Tom. A lot of that comes out of the Obama machine, the Obama plantation.”

“Obama used [Martin Luther] King’s Bible during his inauguration, but under the National Defense Authorization Act King would be detained without due process. He would be under surveillance every day because of his association with Nelson Mandela, who was the head of a ‘terrorist’ organization, the African National Congress. We see the richest prophetic tradition in America desecrated in the name of a neoliberal worldview, a worldview King would be in direct opposition to. Martin would be against Obama because of his neglect of the poor and the working class and because of the [aerial] drones, because he is a war president, because he draws up kill lists. And Martin King would have nothing to do with that.” 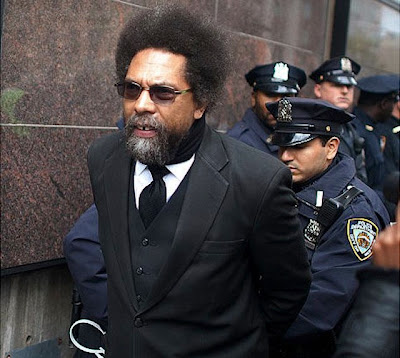 “We are talking about crimes against humanity—Wall Street crimes, war crimes, the crimes of the criminal justice system in the form of Jim Crow, the crimes against our working poor that have their backs pushed against the wall because of stagnant wages and corporate profits going up,” West said. “Abraham Heschel said that the distinctive feature of any empire in decline is its indifference to criminality. That is a fundamental feature of our time, an indifference to criminality, especially on top, wickedness in high places.”
Posted by The Mound of Sound at 1:03 PM

Strong words from Cornell West, Mound, but sadly I find myself in agreement with him. Obama's many failures as president, despite all of the hopes invested in him, will have a lasting and bitter legacy on U.S. democracy. One can, I think, rightfully ask, if a man of his background and intelligence fell so easily into the same old snares that come with power, can one reasonably have any hope that someone else will emerge and fulfill the promise of better and more representative government?

I think, Lorne, when you've been had there's usually a period of unawareness, then uncertainty, and then shocked disbelief as the reality sets in.

When discussing the ascendancy of corporatism today the common term "capture" is used to describe the wresting of power - economic, political, judicial - into corporate control. Most of us don't even notice this is going on. Others simply look away in denial.

Look at the 'true believer' NDP supporters who sit by, faithful and mute, as their party transforms into the very institution they once despised. Under Layton/Mulcair the NDP has become reliably corporatist and a happy participant in the emerging petro-state. The Left is now lost, jettisoned. Corporatism would abide nothing less.

Eventually, if we're very, very lucky, people will come to their senses and we'll usher in a new progressive era. It'll be a fight, probably a fierce fight, because the rights, privileges and powers wrested out of our hands won't be returned voluntarily.

That may be the ultimate failure of the Boomers, Lorne. On our watch we failed to defend democracy against the rise of corporatism. And that very much is our fault to bear.

Even as an athiest, I'll give that an amen.