The Return of the McMansion

Back in the late 80s I fled my old Arbutus Ridge neighbourhood in Vancouver's west side.  It had been a community of small but really neat little bungalows with single car garages accessed by lanes that separated the lots at the back.  They were older houses, built in the 40s, on what were 50 foot, or "lot and a half" parcels, and most had been nicely upgraded over the years.

Then the newcomers from Hong Kong began moving in, paying really high prices for houses in my neighbourhood and others.  They never lived in those neat little houses but tore them down and replaced them with McMansions - huge, 2-storey boxes with a three or four car garage out behind.  It just completely changed the atmosphere of the neighbourhood from pleasant to monstrous.

I was reminded of that today on reading that Burbank, California is suffering its own invasion of the McMansion.   It's a situation where pictures speak louder than words. 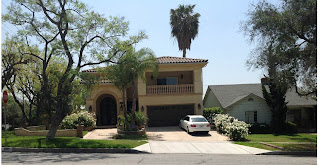 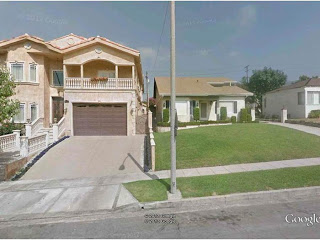 I suppose that's the price of progress.

Progress towards where?
Mind you, some of the "before" places aren't so awesome. Those pristine, largely treeless, certainly veggie-free, empty flat water-sucking lawns . . . when are we going to learn?

Funny thing is, unless maybe you've got a big extended family, I doubt most people live much better in the McMansions than in a smaller house. I get the impression they waste a lot of space, like with big impressive entry areas nobody cares about. And, like, so they have three bathrooms or whatever; is it really such a huge deal to take turns now and then? What exactly do people use all the square feet in great big bedrooms for? Rolling around in their sleep? Five times as many clothes as they'll ever use? What?

I swung by at some point when they were clearing a lot of the forest for development, felt gross.

I went by there a few years ago and it was just unrecognizable.

Actually, PLG, they were lovely and modest homes. Just two modest bedrooms, one smallish bath, kitchen with breakfast nook and door out to a back deck, opening onto an L-shaped dining and livingroom. They were built with a full, partly above ground level basement, opening to the backyard via a few steps. Plus, as I mentioned, a smallish, single car garage with room for a lawnmower. Most finished the basement to provide a third bedroom, rec room and extra bathroom. The houses were essentially the same with just enough cosmetic design differences to keep an acceptable degree of variety.

@ anon. I haven't been back in years. I really loved that neighbourhood so much that it was painful to go back and see what it had become.