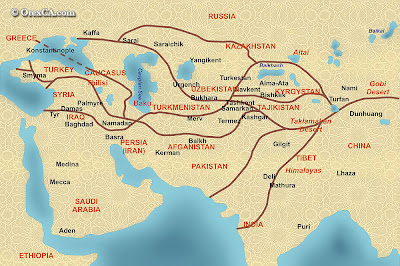 One big thing you almost never read about in the western media is the SCO, the Shanghai Cooperation Organization.

The SCO is something of a work in progress, a Chinese-Russian initiative to create a trade bloc stretching from Eurasia to east Asia to South Asia and into the middle east.   Observers predict it will also morph into a military, mutual-defence alliance akin to NATO.   The SCO would encapsulate roughly half the population of the planet.

Pakistan is already a probationary member and the rest of the "stans" may soon follow.   Asia Times correspondent, Pepe Escobar, says Iran and Syria may soon join the fold to create a 21st century Silk Road.

...to cap it all off, nothing less than a graphic reminder of the stakes involved in the New Great Game in Eurasia; a joint meeting on the sidelines of the SCO, featuring Xi, Russian President Vladimir Putin, and new Iranian President Hassan Rouhani.

This is Rouhani's first foreign trip since he took office on August 4. Not an epic like Xi's; only two days in Bishkek. In a preliminary meeting face-to-face with Xi, Rouhani even started speaking "diplomatic Chinese" - as in the upcoming negotiations over the Iranian nuclear dossier leading, hopefully, to a "win-win" situation. Xi emphatically supported Iran's right to a peaceful nuclear program under the Non-Proliferation Treaty, while Rouhani stressed the Iran-China relationship "bears vital significance for Asia and the sensitive Middle East issue".

And that leads to the common Iran-China-Russia front in relation to Syria. Even before meeting with Putin, Rouhani had agreed with the Russian four-part plan for Syria, which, as Asia Times Online had reported, was brokered between Damascus, Tehran and Moscow (See Al-Qaeda's air force still on stand-by, September 11, 2013). According to the plan, Damascus joins the Organization for the Prohibition of Chemical Weapons (OPCW); discloses the location of chemical stockpiles; allows OPCW inspectors access to the sites; and then comes the long process of destroying the stockpiles.

In the nuclear front, Tehran and Moscow remain open for business. Russia will hand operation of Unit 1 of the Bushehr nuclear power plant over to Iran in less than two weeks. And there will be more "cooperation" ahead.

The importance of this triangulation cannot be overstated. Oh, to be a fly on the wall in that Xi-Putin-Rouhani Kyrgyz room. Tehran, Moscow and Beijing are more than ever united on bringing about a new multipolar international order. They share the vision that a victory for the axis of warmongers on Syria will be the prelude for a future war on Iran - and further harassment of both Russia and China.

There it is, kids.  Welcome to Cold War II.  It'll be East versus West all over again and this time we'll be playing for the Caucasus, Africa and possibly a new political balance for South America.
Posted by The Mound of Sound at 12:21 PM

Is that all? Only Cold War II? The SOC is aming to make a direct hit toward NA wouldn't you think with hard struck vengence. The powers that be better, get their act together and make very, very good friends of South America and that includes Mexico, anything south of good 'ol' US of A. Also, keeping people poor in NA and poorer still in SA isn't going to help NA's bold new vision of defense....if there is one....from fighting the "enemy". If a troop leader, general and command is going to execute the art of using all the forces of a nation as effectively as possible, they better learn what the word "respect" means. There isn't much societal respectfulness in NA except for obscene amounts of money so as to obtain places of so called high powerful positions in order to speak or act in a domineering fashion. With that in mind, how would a huge Armed Forces work given it comes about by inscription..a form of slavery? Perhaps not. Perhaps we would end up filling the place where China left off in 1989. Welcome to the world of predominately third classes with the meanest at the top garnering the sport of dominance and doing just as they please.

Yeah, that sounds about right.

America's decline is inevitable but whether that decline is gradual and minor or rapid and severe rests largely with how Washington responds to change. Part of that challenge will be to restore its middle class and reverse the inequality that Washington has done so much to create.

America's strength has always come from its society, not its magnates. The significance of a cohesive, robust society will become apparent to all countries as they deal with the challenges of this century.