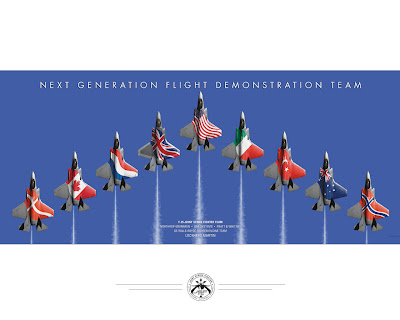 What Lockheed wants, Lockheed intends to get especially when it comes to the F-35 stealth light attack bomber.

Last week the company tried to stiffen spines here in Canada by warning that Canadian businesses stood to lose over $10-billion in contract work if their government tries to play wise guy and cancels the F-35 purchase.  Nice little place ya got here.  It'd be a shame if anyting was to happen to it.

Now Lockheed seems to be doing a full Wall-Mart on its own contractors.  Seemingly desperate to cut costs that are scaring off potential buyers, Lockheed has told the contractors they'll have to accept a little water in their wine.   Now major contractors BAE, Northrop Grumman and engine builder Pratt & Whitney have agreed to do their bit to enable "huge cuts" in F-35 costs.

If big players like these can all simply deliver "huge cuts" you might be forgiven for asking if maybe they weren't richly padding the tab to begin with?

Then again, time has not been kind to the F-35.   The years of delay and re-design have given its potential adversaries time to whittle away at its once vaunted invincibility.  It is, after all, a prototype - a Beta model - rushed into production with predictable results.

The F35 really is a metaphor for our future. Are we going to waste a kings randsom on what appears to be the biggest white elephant in history or will some degree of common sense defeat those that create reality.

I am betting on commons sense because the cash burn on reality distortion is parabolic.

I don't know, Steve. I think in decades to come MBA students will study Lockheed's business model on the F-35 programme as a paragon of power marketing. It's already legendary for the way that contracts and jobs have been mapped into every jurisdiction to leave political opponents vulnerable to their constituents for "job killing." LMT is shrewd - and ruthless.

Of course they were padding their expenses. US military contracting has expense-padding not just endemic, but built into the model from the ground up with the basic approach of "cost-plus" contracts. That is, what the government pays is defined as "whatever it costs the contractor to make it, plus a percentage for profit". Note that the more it (appears to) cost, the bigger your profit slice. Not only is overstating costs a money-maker, so is simple sloppiness and waste--if it really costs you more to make it, your percentage of profit equals more actual money.
There are some fascinating books by Seymour Melman about the nature of US military contracting and, not just its inefficiency, but its negative impact on civilian manufacturing and the broader economy. All this from a solidly left wing perspective, but also from a guy who was deeply involved in issues of industrial production for decades.

Which makes me wonder, PLG, what our defence department officials were doing? The price was obviously inflated big time. Isn't it their job to see that they drive a hard bargain, get the best bang for the buck? This sounds like a multi-billion dollar "go along to get along" project for DND.

I am beginning to think that the "Retire from the military and go work for $$$$$ for a military contractor if you played nice" model is making serious inroads in Canada.

Wonder no more, PLG. I spent the better part of a couple of days online exploring the Canadian situation and, as you suspected, retired generals are in this up to their necks. Perhaps not to the extent they are in the States but plenty close enough.