America is Out of Business 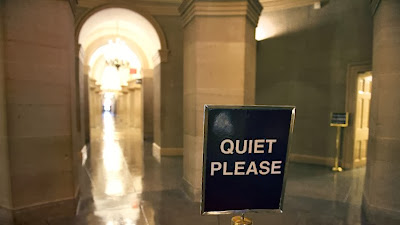 America's Taliban, a.k.a. Tea Party Republicans, have shut down the government of the United States.   Having campaigned against Obamacare in the last elections - and having lost - the Tea Party Repugs nevertheless continue to claim they're acting on behalf of the American people.

A Gallup poll shows that popular support for the Tea Party is nearly at an all time low of around 22%.  Speaker of the House, Republican John Boehner, said "the House has done its work."  If, by "work", he meant blackmailing the White House, they've certainly tried.

Congressional Republicans are expected to take a beating in public opinion for their stunt and it will be well earned.

The federal government officially shuts down at midnight, Tuesday.  The New York Times reports that 800,000 federal employees will be furloughed and another million will be asked to work without pay.

The Office of Management and Budget issued orders that “agencies should now execute plans for an orderly shutdown due to the absence of appropriations.”

“They’ve lost their minds,” [Senate majority leader Harry] Reid said, before disposing of the House bill. “They keep trying to do the same thing over and over again.”

The House’s most ardent conservatives were resigned to seeing through their war on the health care law to its inevitable conclusion, a shutdown that could test voters’ patience with Republican brinkmanship.

Cracks in the party were opening into fissures of frustration.

“It’s moronic to shut down the government over this,” he continued.

Some interesting tweets at the Brookings Institution web page.  Michael Fullilove asked, "What sort of superpower regularly goes to the brink of shutting down its government?"   Former Utah governor and not particularly successful candidate for the Republican presidential nominee, John Huntsman, tweeted, "Bernard Goldberg made total sense on @oreillyfactor tonight. There is a civil war brewing within the Republican Party."

Meanwhile, Paul Krugman warns the closure must not be taken lightly, even if the Republicans don't get it.

O.K., a temporary government shutdown — which became almost inevitable after Sunday’s House vote to provide government funding only on unacceptable conditions — wouldn’t be the end of the world. But a U.S. government default, which will happen unless Congress raises the debt ceiling soon, might cause financial catastrophe. Unfortunately, many Republicans either don’t understand this or don’t care.

...it’s important to note that the Clinton-era shutdowns took place against the background of a booming economy. Today we have a weak economy, with falling government spending one main cause of that weakness. A shutdown would amount to a further economic hit, which could become a big deal if the shutdown went on for a long time.

...failure to raise the ceiling would mean missed payments on existing U.S. government debt. And that might have terrifying consequences.

...suppose it became clear that U.S. bonds weren’t safe, that America couldn’t be counted on to honor its debts after all. Suddenly, the whole system would be disrupted. Maybe, if we were lucky, financial institutions would quickly cobble together alternative arrangements. But it looks quite possible that default would create a huge financial crisis, dwarfing the crisis set off by the failure of Lehman Brothers five years ago.

No sane political system would run this kind of risk. But we don’t have a sane political system; we have a system in which a substantial number of Republicans believe that they can force President Obama to cancel health reform by threatening a government shutdown, a debt default, or both, and in which Republican leaders who know better are afraid to level with the party’s delusional wing. For they are delusional, about both the economics and the politics.

I wonder if Barry O is beginning to understand that he utterly wasted his first term majority trying to suck up to assholes.

Perhaps his legacy will come from forcing the Republicans to break up on the shoals of their own radicalism. Maybe not.