Is Montreal an Object Lesson for Canada? 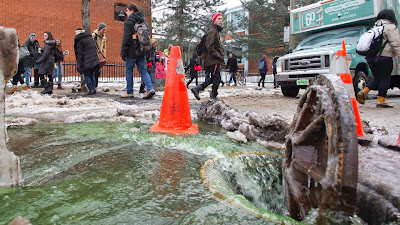 To comprehend the root causes behind the extensive rot plaguing Montreal’s infrastructure network — a circulatory system comprising 6,000 kilometres of roads and 9,000 kilometres of water mains and sewage pipes — it is useful to think of it as a car.

Spend minor amounts on oil changes and other preventive maintenance and your vehicle will age gracefully, says Gabriel Assaf, professor of civil engineering at Montreal’s École de technologie supérieure. Forgo those needs, and small problems will morph into hugely expensive ones.

“It’s the same thing with our infrastructure network,” Assaf said. “We’ve neglected it for many years and now we have to change the engine. ... Obviously it’s a huge deal, and obviously the elected officials don’t have any clue how to finance this. They are facing a huge problem based on a lack of responsibility.”

Montreal has serious problems with the city's road network, its sewers and water mains but it's standard fare for most jurisdictions where politicians have been reluctant to raise taxes needed for maintenance and repairs.   Everybody, including our federal government, wants to kick expensive problems down the road for future governments or other levels of government to handle.

These problems are made far worse by the onset of climate change impacts.   In June, as Calgary flooded, the World Council on Disaster Management held its annual convention in Toronto.

Professor Mirza estimated the cost of repairing and upgrading Canadian infrastructure as needed to withstand climate change impacts at one trillion dollars.   He emphasized that not spending that trillion dollars would cost far more in the long run.

Ultimately you can rule a country in five year stretches but that's not the same as governing.  It takes guts to govern a country, guts and a strong sense of responsibility.

A trillion dollars.  That's some serious stimulus spending only it's more than money spent.  It's money invested in infrastructure that will pay for itself, returning value to taxpayers well into the distant future.