Monbiot Reminds Us the IPCC Report Is Very, Very Conservative. 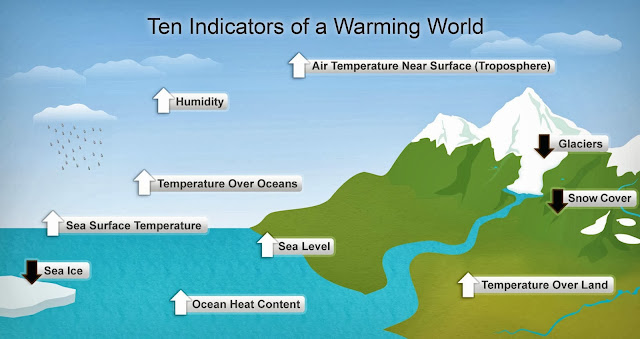 One of the brilliant successes of the Right has been to cast the IPCC as a gang of Lefty alarmists.   At that point they skip over how the IPCC has routinely understated both the speed and extent of climate change onset.

The IPCC releases a consensus report.  It's not even a majority report.  In a consensus report everyone has to agree.  That's why the reports are always watered down - to achieve a consensus.   At the end of the day we all have to settle for vanilla.   Here's an example.   While the IPCC ponders our chances for breaking the 2C safety target by 2100, our own Environment Canada foresees we'll get there by 2050.  See the difference?

Reaching agreement among hundreds of authors and reviewers ensures that only the statements which are hardest to dispute are allowed to pass. Even when the scientists have agreed, the report must be tempered in another forge, as politicians question anything they find disagreeable: the new report received 1,855 comments from 32 governments, and the arguments raged through the night before launch.

In other words, it's perhaps the biggest and most rigorous process of peer review conducted in any scientific field, at any point in human history.

Even then, says Monbiot, we get utterly lost in the message of the IPCC reports.

What the report describes, in its dry, meticulous language, is the collapse of the benign climate in which humans evolved and have prospered, and the loss of the conditions upon which many other lifeforms depend. Climate change and global warming are inadequate terms for what it reveals. The story it tells is of climate breakdown.

And, no matter what they say publicly, our political leadership is wed to a fossil fuel economy.

...all governments collaborate in the disaster they publicly bemoan. They sagely agree with the need to do something to avert the catastrophe the panel foresees, while promoting the industries that cause it.

It doesn't matter how many windmills or solar panels or nuclear plants you build if you are not simultaneously retiring fossil fuel production.

But, far from doing so, governments everywhere are still seeking to squeeze every drop out of their own reserves, while trying to secure access to other people's. As more accessible reservoirs are emptied, energy companies exploit the remotest parts of the planet, bribing and bullying governments to allow them to break open unexploited places: from the deep ocean to the melting Arctic.