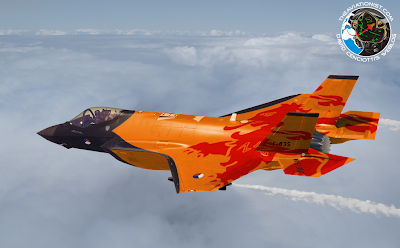 At the outset the Netherlands was expected to buy 85 of Lockheed's light attack stealth bomber, the F-35.   For a nation not much larger in area than Vancouver Island that seemed like a hefty purchase.

Now the Dutch have announced they'll settle for just 37 of the overpriced, overdue and underperforming warplanes.   That seems to make the F-35 something of a niche buy for the Netherlands.  Not particularly inspirational but it still gives Lockheed something to crow about as the company tries to strongarm South Korea into rethinking their decision to go for an  updated F-15 buy instead.
Posted by The Mound of Sound at 5:06 PM

The Dutch might be better off just updating their current F-16s.

F-35 is an pool of susidary corruption .

The F-35 is proving to be the best fighter aircraft in the world, so much so Germany and Taiwan would now like to purchase it: