Are We Medicating Ourselves to Death? 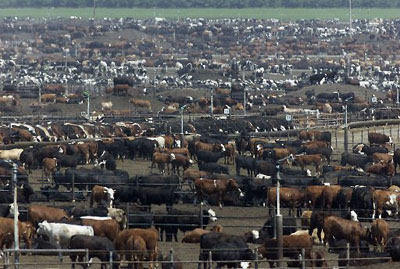 A report from the U.S. Center for Disease Control (CDC) wades into the tens of thousands of lives claimed in America each year from overuse of antibiotics.

Each year in the United States, at least 2 million people become infected with bacteria that are resistant to antibiotics and at least 23,000 people die each year as a direct result of these infections. Many more people die from other conditions that were complicated by an antibiotic-resistant infection.

Antibiotic-resistant infections can happen anywhere. Data show that most happen in the general community; however, most deaths related to antibiotic resistance happen in healthcare settings such as hospitals and nursing homes.

It has long been standard practice to heavily medicate livestock to keep them alive until they can be slaughtered and processed.   77% of antibiotics used in the United States goes to treat livestock.  This bolsters the industrial producers' bottom line but at what cost?  The big cost, the one that's going to become increasingly dangerous, is the evolution of drug-resistant strains of bacteria.

Over and above anti-biotics, doctors generously write prescriptions and people pop pills for every little discomfort.

If you watch Celebrex commercial side-effects include stomach bleeding and sudden death or heart-failure and sudden death. I rather put up with pain than take this poison.