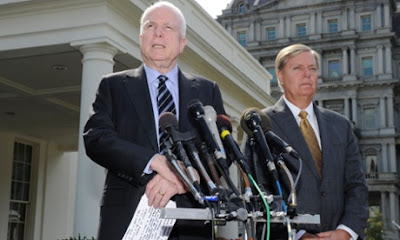 These geezers think calling off the aerial shitstorm planned for Iran Syria is a big mistake.

In a statement released on Saturday, McCain and Graham said the deal would give the Syrian president, Bashar al-Assad, time "to delay and deceive" while the country's civil war continued.

The statement said: "It requires a willful suspension of disbelief to see this agreement as anything other than the start of a diplomatic blind alley, and the Obama administration is being led into it by Bashar Assad and [Russian president] Vladimir Putin."

Why don't they take these two old farts, strap tail fins to their ankles, and bomb Syria with them?
Posted by The Mound of Sound at 1:49 PM

McCain is an old fart and does not know what is he talking about. The other guy? You may be right. He is in love with the old fart and follows his lead.