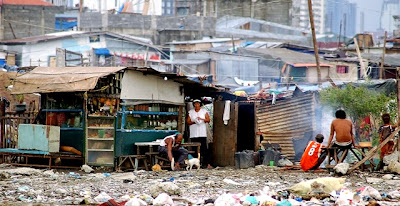 Yeah, I know, I know.  Me too.  Then again, the Philippines is a good long way away from Main Street, U.S.A.

American officials are urging the Phillipines to see to fair distribution of the country's new found wealth.

Despite having Asia’s second highest growth in gross domestic product (GDP) last year, the Philippines still has a lot of catching up to make the growth felt and enjoyed by the rest of the country’s population.

“We all know that the Philippines has now outpaced all the countries in the region in terms of economic growth,” said Gloria Steele, mission director of the United States Agency for International Development in the Philippines.
Steele, however, said the bigger challenge is how the 42 percent of Filipinos who earn just US$2 a day can benefit from the economic growth.

So, let's see - Wage inequality, check; lack of transparency, check; lack of integrity, check.   Sounds awfully familiar, doesn't it?   And, please, do something about the cost of doing business.  Maybe you can just cut wages.
Posted by The Mound of Sound at 11:00 AM

Email ThisBlogThis!Share to TwitterShare to FacebookShare to Pinterest
Labels: inequality, Philippines, US

Yeah! America also wants to spread democracy. Recent recipients of that democracy are Afghanistan and Iraq - lucky them???