Reaping the Whirlwind in Egypt 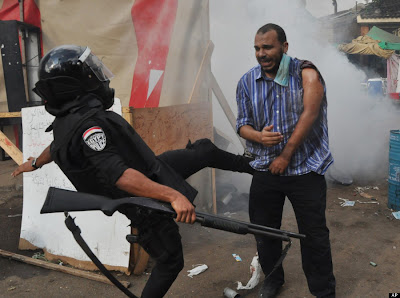 If democracy is to have any chance of surviving in Egypt it's up to the E.U. and the U.S. to move against the generals.   The Egyptian army's counter-coup is now a fait accompli.   Expectations that toppling the democratically-elected Morsi government would pave the way for a secular, non-elected, democratic (???) civilian government have been dashed as the generals moved to consolidate their hold on the country.

It's been suggested that Western governments and media demonized Morsi to condition the public for his ouster.   If so, it worked.

Mubarak was released, Morsi imprisoned.   When secular leader El Baradei resigned in protest at the military's wanton power grab he and his family had to flee to safety in Europe even as the generals ordered his arrest.

Today's New York Times editorial asks, "Who Will Be Left in Egypt?"

On Thursday, with much of the world distracted by Syria, the Egyptian generals and the civilian officials they have appointed extended a countrywide state of emergency for two months. And after overthrowing Mohamed Morsi, Egypt’s first freely elected president, two months ago and trying to crush his Muslim Brotherhood allies, security forces have also begun to round up other dissenters, a chilling warning that no Egyptians should feel safe if they dare to challenge authority.


The 1950s-era state of emergency law, which removes the right to a trial and curbs on police abuses, was for decades a hated symbol of Mr. Mubarak’s excesses. Although the law stayed on the books, the state of emergency was suspended after Mr. Mubarak’s overthrow. The military leadership revived it last month and has extended it until November, citing the security problems that have only grown worse since Mr. Morsi’s ouster.

Just as troubling, the government has moved from singling out the Brotherhood and other Islamists to going after liberal and left-leaning activists and journalists.

There seems to be no end to the draconian controls as the military seeks to restrain the news media, manipulate the courts, misuse security services and restrict civil society groups. If it prevents the Muslim Brotherhood from operating at all, as many expect, it will go even farther than Mr. Mubarak. The process of revising the Constitution that was put in place by the government seems as flawed as the one implemented by Mr. Morsi. The results are almost certain to be regarded by many Egyptians as illegitimate.

The Times calls for Washington to cut off all aid to the generals.  A similar appeal to the European Union was recently made in The Guardian.  Unfortunately the message has yet to be sent to the men with the funny hats and all the ribbons in Cairo.

Cutting off aid to Egypt will make things much more worse in the long run. This is just another case of the choices for the West on what to do about Egypt ranging from worse to more worse. "Better" is illusory at this point.

My thoughts are to just accept reality, and take the worst choice.

I don't know, Chris, business as usual doesn't sound like a plan to me.