Cassiope rode into space atop a modified Falcon rocket. 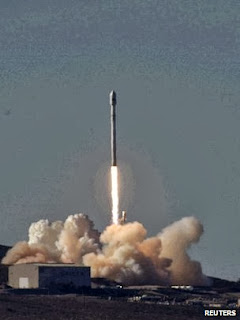 Sunday's launch was also the first time the rocket had flown with a payload fairing.

This 13m-tall clamshell covering is necessary to protect satellites from the aerodynamic forces encountered during an ascent.

Sunday's outing was the first SpaceX mission to use Vandenberg. Until now, all Falcon launches have gone out of Cape Canaveral Air Force Station in Florida.

The MDA Corporation, which built the Cassiope satellite, reported that the small research platform was performing as expected after being ejected by the Falcon's second stage. Cassiope, a project of the Canadian Space Agency, will study the Sun's interaction with Earth's upper atmosphere.
Posted by The Mound of Sound at 2:32 PM

Consider it noted. I am wasting my time trying to show someone b.s. is included in his stock in trade. Pity. You laud being sensible about not believing the guff promoted as common sense just because propaganda incessantly drives it home.

You see, Opit, you're the simpleton. You think some nonsense spewed at a couple of web sites trumps all the research by thousands of scientists from almost every scientific discipline. Why? Because that's what you want to believe. Believe whatever you like. I don't give a shit. Why don't you begin reading those research papers and come back telling me the science that proves them wrong? Show me where the biology of climate change is wrong. Show me where the chemistry of climate change is wrong or the botany or hydrology or geology or climatology or oceanography or meteorology or atmospherics or the dozens of other disciplines that steadily corroborate the theory of anthropogenic global warming are wrong. But blockheads don't read science, do they Opit? You're a waste of bandwidth, Opit.

"all the research by thousands of scientists from almost every scientific discipline" Show me. Meanwhile, here's a sample of the candour *cough* attending the presentation of scientism. http://www.motherjones.com/environment/2013/10/inquiring-minds-kahan-lewandowsky-communicate-climate