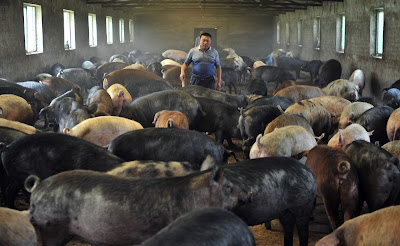 China is taking a page out of North America's book, discovering that antibiotics are the key to industrial livestock production.  Already half the antibiotics used in China go to keeping livestock ticking over until they can be slaughtered. 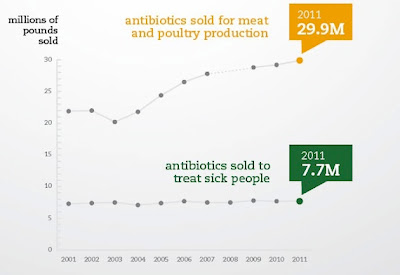 A research team led by scientists from China and Michigan State University recently found "diverse and abundant antibiotic resistance genes in Chinese swine farms," as the title of the paper, published in the Proceedings of the National Academy of Sciences journal, put it.

The ratio of farm-to-human use of antibiotics obviously tell us as much about trends in human antibiotic use as they do about farm use. As the chart above shows, US antibiotic consumption for medicinal purposes has held steady for a decade. Meanwhile, Time reported last year, per capita human antibiotic use is 10 times higher in China than in the United States, and "70 percent of inpatients at Chinese hospitals received antibiotics; the World Health Organization (WHO) recommends a maximum of 30 percent." So one reason a lower percentage of antibiotics go to farms in China is because so damned much is being used for human medicine there.

So, given China's staggering human consumption of antibiotics it seems likely that they're actually medicating their livestock more heavily than we do.  And in China, where many farmers are known to live in close proximity to their farm animals, resulting in animal to human transmission of avian and swine flues, the emergence of antibiotic resistant disease strains is a nightmare in waiting.

And you'll probably remember last year when thousands of dead pigs turned up in rivers that provided drinking water to Shanghai. 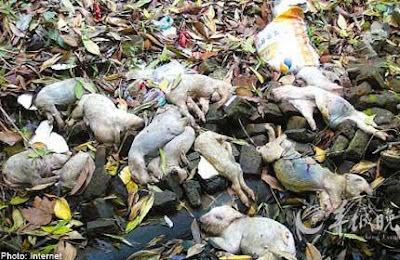 Moral of the story: Don't eat fish or beef. I have gone vegan.

I wish the solution was that simple.

At least it might stop diseases such as sars...??

But LD, I love my fish and my poultry and my meat.

And, Anon, no it won't. SARS, like MERS or HIV or even the common cold, is a virus and they're not affected by antibiotics.

I'm sorry MOS...my comment wasn't for real. These people believe cetain foods will stop sars and other virus' especially if they are treated with antibiotics. Next time, I'll be a little more careful.