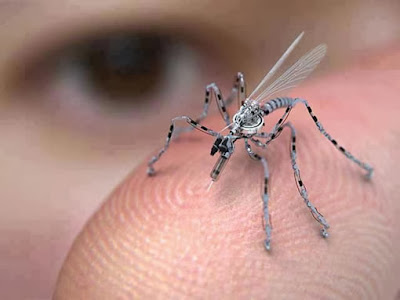 Noam Chomsky has got a drone in his bonnet.  He sees the evolution of drone technology as the instrument by which we lose not merely our privacy but the very foundations of our liberty.

Chomsky contends that Obama has become addicted to remote control assassination, drone warfare, to the point where he's unraveling Magna Carta itself:

And questions did come up about what happened to due process, which is supposedly the foundation of American law—it actually goes back to Magna Carta, 800 years ago—what about that? And the justice department responded. Attorney General Holder said that they are receiving due process because it’s “discussed in the executive branch.” King John in the 13th century, who was compelled to sign Magna Carta, would have loved that answer. But that’s where we’re moving. The foundations of civil law are simply being torn to shreds. This is not the only case, but it’s the most striking one.

Most of us probably don't pay much heed to the relentless march of drone technology.   Through Aviation Week and similar publications I do try to learn what I can and have found that even the stuff that's publicly available is very disturbing.

Got three hundred bucks?  You can go down to a store like Future Shop and buy your own wi-fi micro drone that you can control with your iPhone or an Android tablet.   It even comes with an onboard HD camera.   And, yes, it hovers.

The U.S. military is far beyond toy drones.  They're developing micro aerial vehicles that can be solar powered or can recharge by alighting on a power line.   They can operate as a swarm, infiltrate buildings, carry a variety of sensors and communications systems, and some can even kill.   Just last month it was reported that the U.S. military is exploring the use of swarms of long-range nano drones to attack China.

Chomsky says that today's society is remarkably complacent to the drone development and what that portends, even for themselves.

And the reactions are pretty interesting. It tells you a lot about the mentality of the country. So one column, I think it was Joe Klein, a bit of a liberal columnist for one of the journals, was asked about a case in which four little girls were killed by a drone strike. And his answer was something like, “Well,  better that their little girls should be killed than ours.” So in other words, maybe this stopped something that would ultimately harm us.

There is a reservation in the United Nations Charter that allows the use of force without Security Council authorization,  a narrow exception in Article 51. But it specifically refers to “imminent attack” that’s either underway or imminent so clearly that there is no time for reflection. It’s a doctrine that goes back to Daniel Webster,  the Caroline Doctrine, which specifies these conditions. That’s been torn to shreds. Not just the drone attacks, but for a long time.

And so slowly the foundations of liberty are ripped to shreds, torn apart. Actually Scott Shane, one of the authors of the Times story, did write an article responding to the various criticisms that appeared. His ending was quite appropriate, I thought. He said something like, “Look, it’s better than Dresden.” Isn’t it? Yeah. It’s better than Dresden. So that’s the bar: we don’t want to just totally destroy everything. We’ll just kill them because maybe someday they will harm us. Maybe. Meanwhile, well of course, what are we doing to them?

...You know, I have to say, I never expected much of Obama, to tell you the truth, but the one thing that surprised me is his relentless assaults on civil liberties. I just don’t understand them.
Posted by The Mound of Sound at 8:49 AM

I think it's official now. Humanity has gone mad.

I think what we're seeing is that those who hold democracy lightly will surely see it pulled from their fingers.

"...those who hold democracy lightly will surely see it pulled from their fingers."

That is a great image, Mound. I truly hope that that will be the outcome.

Why would anyone wish that?