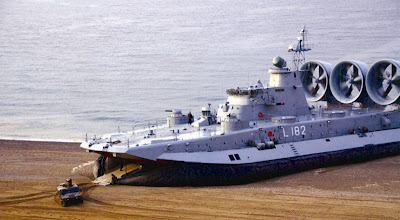 It's the largest military assault hovercraft in existence and China is expected to soon field four of them.  It's also considered China's "go-to" option for an amphibious landing on Japan's Senkaku islands. 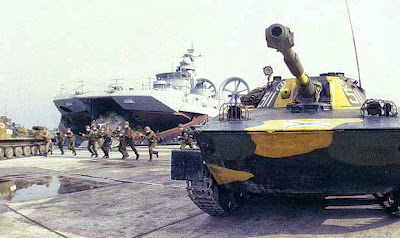 Capable of rapidly deploying a company of assault troops along with either three main battle tanks or up to ten light armoured vehicles it's a pretty capable bit of hardware.

China is getting two of the ships from the Ukraine and building the other two in its own shipyards which means it's not limited to four by any means.

Meanwhile, now that the U.S. seems to be getting its NATO ducks in a row on the F-35, it's starting to clamor for them to do more to support America's military "pivot" into Asia.   The United States wants more NATO naval power to safeguard the Mediterranean and Persian Gulf regions  while American naval forces focus on the Pacific.

“Absent a crisis or a threat that manifests itself largely as a naval threat, Europe is unlikely to return to large, balanced fleets,” the report says. “With US armed forces increasingly focused on the Asia-Pacific region, there are growing concerns as to whether the navies of America’s continental allies are up to meeting the challenges arising from the general unrest on Europe’s eastern and southern maritime flanks.”

Despite NATO taking its name from the ocean that ties Canada and the U.S. to their European allies, for most of NATO’s history the alliance focused primarily on land power, the report notes.

“However, with continental Europe at peace, the drawdown in Afghanistan, the rise of general unrest in North Africa and the Levant, and the American intent to pivot toward Asia, questions are increasingly arising about the capabilities of NATO’s European navies to project power and sustain operations around their eastern and southern maritime flanks,” the report says.

“These questions have grown even more urgent in the wake of those same navies’ uneven performance in the 2011 military campaign against Muammar Gaddafi’s Libya,” the report says.

“Examining the major navies of America’s European allies reveals a general desire, with the exception of Germany, to maintain a broad spectrum of naval capabilities, including carriers, submarines and surface combatants. But given the significant reduction in each country’s overall defense budget, procuring new, sophisticated naval platforms has come at the cost of rapidly shrinking fleet sizes, leaving some to wonder whether what is driving the decision to sustain a broad but thin naval fleet capability is as much national pride as it is alliance strategy.”

NATO, formed to defend Europe from the Soviet threat was not created for the purpose of projecting power outside the European, and North Atlantic theatre. I suppose NATO still has the same role to fulfil, although obviously with less urgency. I think it is long past the time to review the NATO treaty, and decide if the members actually want to change themselves into an adjunct of American foreign policy or not.

No question that it's time to rethink NATO, Matt. Perhaps that will mean the Euros becoming more self-reliant for their own regional security concerns from Turkey to Greenland.

The alliance was strained by the expansion under Bush/Cheney to the Russian borders. That has to be rationalized somehow.

NATO's European members really have to decide whether they're willing to become an auxiliary to SEATO in Asia Pacific. I can't see the logic in that.