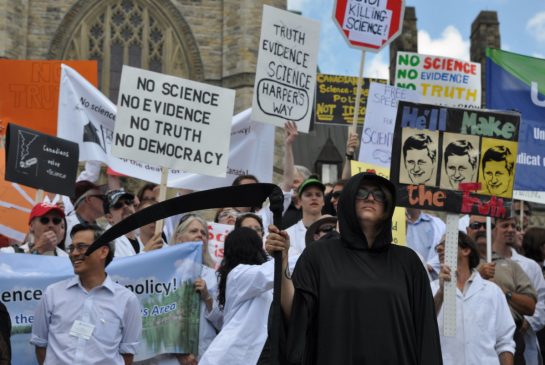 It's no secret that Canadian government scientists are infuriated at the lockdown imposed on them by the ultra-secretive Harper government.  Why, it's almost as though the Harper regime has something to hide or, perhaps, a good many things.

In a series of demonstrations to be held across the country on Monday, groups of scientists and science advocates are aiming to put their concerns about the state of Canadian research in the public spotlight – and put politicians on notice.

Organizers of “Stand up for Science” said that rallies are planned for 16 cities from Halifax to Vancouver and as far north as Yellowknife.

“I keep getting calls from people saying: Add my city to the list,” said Katie Gibbs, executive director of Evidence for Democracy, the Ottawa-based science advocacy group that is coordinating the effort.

The protests represent the latest and most widespread public reaction from Canadian scientists to policies they say have stripped away funding for basic research, stifled evidence based decision-making in government and limited public access to federal scientists.

Harper knows that information is power and that an informed electorate offers nothing good for him and his cronies.   The man is diabolical.   It makes me wonder how anyone who puts Canada first can vote for this bastard.
Posted by The Mound of Sound at 8:25 AM

I haven't a clue what you're getting at, Anon. What did Kinsella write that you found patronizing and hateful?

Okay, I think this must do with Kinsella's piece about not hating Harper. I'm at a loss to respond to that. I personally think sociopaths are evil people. I think that individuals who use their power to suppress others are evil. I think that those who who stoke fear and anger in others to manipulate them are basically evil. I do hate evil people especially when, with utter callousness, they enact policies that will cause harm and loss to my children in decades to come.

Warren is much more sanguine, it appears, with this sort of thing. I didn't "hate" Brian Mulroney or Joe Clark. In fact I sort of liked Clark and I found his predecessor, Bob Stanfield, a fine man. Stephen Harper is not of their kind and, for that, I find him loathsome.