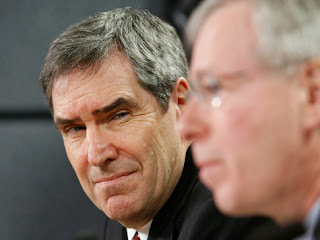 Michael Ignatieff has a reputation for smearing others, even where they've been right and he's been wrong, and he appears to have lost none of his appetite for that sort of thing.

In his new book, Fire and Ashes, Iggy takes swipes at Stephane Dion, at Bob Rae and at Jack Layton - everyone it seems except Stephen Harper.

And as for Harper soaring to a majority on the back of Ignatieff's hapless leadership?   Well that's the voters' fault, not Iggy's.  “So instead of getting the democracy they deserve, voters end up paying for their own disillusion.”

Iggy is an ass - glad to see nothing has changed.

I suspect he would have been happier as a Conservative, same hubris and ignorance.

There's a latent commentary here about the capacity for delusion of the British elites who first chose to identify this self-important sanctimonious dweeb as a public intellectual.

At this point I'll be very pleased to never hear his name again.

While Dion showed some promise as a leader, Iggy was a total non-starter and one of the biggest reasons we're now stuck with the perpetual harper machine, for who knows how much longer.

His ego won't permit him to sling at Harper.

Harper defeated him, that's not something he can dispute, ergo Harper must be respected. He can't disrespect someone who attained what he desired to attain, because if he does, he diminishes himself, and, more importantly, his estimate of how the public sees him.

My assumptions were correct about Iggy from the very beginning. People poo-pooed my comments. Anyong

The rich, snobby, right-wing Iggy didn't criticize Harper because he agrees with most of his policies. That's why Iggy's Liberals kept voting in favour of Conservative legislation and only offered up token weak criticisms when they were the official opposition.