Greetings from Global Warming. Now Pay Up or Else. 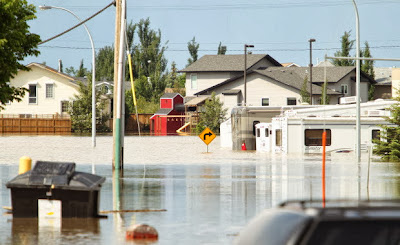 It doesn't matter how certain they are that climate change is a hoax.  They're still going to have to pay up.   The U.S. federal flood insurance programme (private sector insurers said 'adios' long ago) is bringing home the reality of climate change in the form of massive premium increases for homeowners in coastal or flood prone areas.  From Reuters:

Carol Giovannoni, 51, of St. Pete Beach, a barrier island community off Florida's west coast, is one of the people dreading October 1, when the law takes effect. Giovannoni said the annual flood insurance premium on her standard 1950s concrete-block, ranch-style home on the waterfront will jump from $1,700 to $15,000 over the next few years. She said her home has never flooded in 59 years.

Were Giovannoni to sell her home, or let her policy lapse, the new rate would apply immediately, she said, but exactly how rates will be calculated under the Biggert-Waters Flood Insurance Reform Act of July 2012 is unclear to many.

Congress passed the law, as it turned out just months before Superstorm Sandy struck the northeastern coast in late October, in an effort to balance a $24 billion deficit in the National Flood Insurance Program, which had growing losses from Hurricane Katrina in New Orleans in 2005 and earlier disasters.

"Once these rates go into effect, the value of our house is probably cut in half. We will have a tough time selling," said Giovannoni, who is a realtor, noting that flood insurance is required by mortgage lenders.

Canada will probably have to do something along the same lines for properties built in flood zones.   At the moment we still treat these as "once in a century" events that qualify for federal disaster relief but when megafloods sweep neighbourhoods once a decade we can't keep bailing them out.   Besides, Albertans hate socialism.


Between recurrent megafloods inland and the combined impact of sea level rise and severe storm events of increasing frequency and intensity there are places for which the only solution is retreat.


Vancouver and the Lower Mainland face serious challenges.  Seawalls and dikes can hold back some impacts of sea level rise but probably not major storm surge on high tides.   And the mighty Fraser River, that created the Lower Mainland estuary in the first place, does have to empty into the sea.   Sea level rise will increase the already difficult problem of Fraser River flooding.

It would be great if Stephen Harper's gang would start dealing with these issues but that might screw up his narrative on flogging filthy fossil fuels.   For Harper, climate change is that weird cousin we keep in the attic.

Griffiths says enough studies have been done and now it is time to take action.

“It’s time to put some of that into action, engineer the results so that people can see the tension dams going into place, the diversions, whatever it is that’s going to secure their community, somewhat against flood going forward. Like I said, you can’t flood proof but you can sure do a lot to mitigate the risk,” said Griffiths.

The minister said he's looking for a $2 to 2.5-billion bailout from Ottawa to cover this year's flood losses.  He seems pretty sure he's going to get it.  Where is Stephen Harper's riding anyway?
Posted by The Mound of Sound at 8:52 AM

Albertans hate socialism when it applies to other Canadians. When socialism helps them rebuild and repair their homes, which they built on flood plains, then they are all for it.

Pity couldn't have a nice little affair with dumping trash outside the offices of every Conservative MP. In the case of the Dishonourable Prime Minister, his riding office in Calgary Southwest would be the best target.

Probably have Albertans that would agree with me on wanting to send the Albertan of Convenience back home to Toronto.