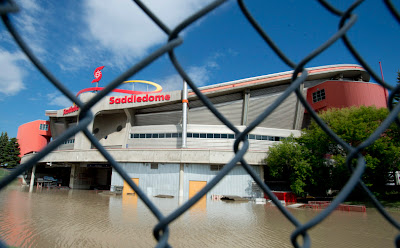 One of the helpful services Google provides is a daily roundup e-mail of news stories on virtually any subject you might specify.  They pick out top news stories from around the world and send them along with hyperlinks to your inbox.

This service provides a helpful way to keep tabs on happenings in areas such as arms races, inequality, climate change and so on.  Over time it's possible to detect trends and changes in the world or in various corners of it.

One subject of interest to me is flooding of the sort we experienced this year in Toronto and Calgary.  That sort of severe weather event now seems to be almost commonplace around the world.  Britain is a perfect example.  It was once known for plenty of gentle drizzle, at times seemingly incessant, that kept the place lush and verdant.   Now many of its valleys and quaint, often historic villages are enduring cyclical inundation that threatens their very continuation.   Those villages weren't built for this sort of climate and they've never experienced it before.

What is telling in the news reports is that many of them mention not just a heavy rain but continuous periods of heavy rain.  This is what happened in Calgary and Colorado.  Heavy rains arrive and they set in.  They park over an area for days and overwhelm the topography and infrastructure.  This is happening pretty much across the entire northern hemisphere.

What accounts for it?  Well that all depends if you're willing to accept the science of climate change.  If you insist that climate change is a hoax you pretty much have to blame it on mischievous spirits such as Loki.  If, however, your mind isn't trapped inside a jar, you can blame it on climate change and the plain and obvious scientific evidence.

A warming atmosphere in the far north has shortened winter and greatly reduced the Arctic ice cover.  The loss of all that white has exposed the deep green Arctic ocean waters.   The white ice used to reflect solar energy.   The deep green sea water absorbs that solar energy, in turn generating ever more heating.  A warmer atmosphere holds more water vapour, itself a powerful greenhouse gas.  It also has far more energy.   The net result is a new, far more powerful Polar Jet Stream and that's the main culprit behind the flooding.  No, sorry, it's not really Loki.

The subtropical jet stream we've known and relied on all our lives was a more or less gently undulating ribbon of fast moving air that kept our weather moving relatively steadily westward.  A heavy rain front might move in but tomorrow it would be someone else's problem to the east.  That steady migration of weather was also crucial for agriculture.  It brought farmers moderate amounts of precipitation throughout the growing season.   Not too little,  not too much - at least most years.

The polar jet, however, manifests in Rossby Waves.  These dip far into the south and peak far into the north and they're very slow moving, at times almost stopping their westward travel entirely.  This polar jet can bring warm weather out of the south into the far north.  We saw that in early summer when a village in north central Alaska hit 94F.  We saw that again last winter when Arctic air froze the canals of Venice.  We also see its effect when it parks heavy rainstorms over Alberta or Colorado or many other places across the northern hemisphere.

Eventually we'll come to treat this as the new normal.  That's going to entail rejigging our notions of flood plains and the retreat from low-lying, vulnerable areas to higher ground.  In some places infrastructure such as floodways may ease dislocation.  In others, infrastructure solutions may not be feasible making retreat the only option.

It will probably be a few more years,  perhaps several, before we understand how this will impact agriculture in the long term.   That will hinge also on what we learn about the long term impacts of warming and drought.   There will be, and already are, places that will be whipsawed by both.  As they say - time will tell.

If you've got a teenager with a flair for science, you could do worse than to steer him/her toward a career in hydrology.   Just sayin'.
Posted by The Mound of Sound at 10:55 AM

It is unfortunate for the climate change deniers that their worldview is benighted in its dogmatic monotheism, thus also close-mindedly denying the existence of Loki. ;)

Thus they cannot access that compelling explanation for strange weather. Although really Loki would be more likely to bring about the great winter leading to Ragnarok than warming--but he's a tricky deity and does part time as a fire god. Perhaps the plan is to use the weather to create global havoc, escalating global tensions, with nuclear war as an endgame, thus leading to catastrophic cooling from the nuclear winter--an unending winter lasting three years, nuclear Fimbulwinter.

The Ocean is Broken
A depressing read. It is also a warning. We're living beyond our means. This 'civilization' we call ourselves is going to be drawn out and quartered by the changes to the Earth that are coming.

Ah, PLG, you did it again. I had to go running off to figure out what in hell 'wast fimbulvetr' and now I wish I hadn't. Yet the realities that are looming to confront us do raise apocalyptic spectres.

Hi Troy. Yes we are living beyond our means. Your people are far more rational about this than the rest of us. And more First Nations have also retained essential knowledge of living off the land in self-reliance. Imagine what might happen if the rich people realize you have something that they can't steal. It boggles the mind.