Is Duffy Past the Point of No Return? 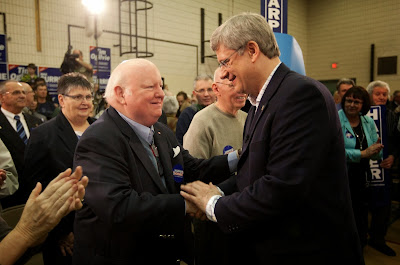 Duffy disclosed that Hamilton negotiated at least a small part of the Wright-Duffy deal with the senator's counsel.  If, as appears to be the case from a plain reading of the statute, it is an offence to give or loan money to a senator in connection with that person's office, then it appears that the Tories' legal top gun may have facilitated the commission of an offence.  It's not clear as yet but it's a possibility.

Now that's the sort of thing that law societies take seriously.  Lawyers can readily find themselves disbarred for that type of conduct.   With Don Bayne as his counsel it's hard to imagine that Duffy didn't fully understand the implications of his disclosure.  At the very least it's not the sort of thing that's going to be forgiven or lead to some gushy reconciliation between the Conservative Party and its pudgy prodigal  son.

It adds context to Duffy's words to his fellow senators today when he asked, "Have you heard enough or do you want to hear more?"  It's sort of like he asked if they really wanted to find out who's next.

I had thought he'd be taking down Marjory LeBreton today.  Maybe he'll leave that for later in the week, closer to the opening of the Conservative Party convention on Friday.   My guess is that there'll be a lot of powerful rightwingers scrambling to come up with a real nice severance package for the Cavendish Cottager before the convention opens.

Would a severance package not also be an inducement?

He did mention something about the chain of LeBreton emails and how he couldn't wait for Canadians to read them so maybe he just tabled them too and went for a defrib while he waits for that particular explosion.

If all the people with something to reveal about Hamilton came out of the woodwork I suspect the walls would collapse.

It's also quite imaginable that Duffy is having dreams wherein his dear departed mother is tormenting him like a Shakespearean harpy.

Hey, Dana. No, Duffy won't be wasting ammunition. I had thought the LeBreton stuff would come out today but he's apparently testing the waters to see how much spine his former pals are willing to show.

Still, calling out Arthur Hamilton is absolutely huge. There will be a lot of people thinking they're getting shafted because of Harper.