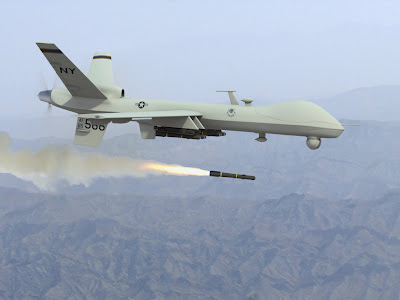 There may be nothing that conveys the degree to which the United States has debased itself in the supposed War on Terror more than the now infamous "Double Tap".  It's a term coined by professional assassins to describe the insurance shot.

In modern drone warfare,  the Double Tap has been elevated to truly diabolical status.  It works like this.  A target is located.  This normally comprises two or more apparent suspects.  A drone is brought on target and fires a missile at the suspected bad guys.  Once the targets are wiped out the exercise ramps up a bit.   The operator monitors the kill zone - and waits.  There's a period of waiting for rescuers to materialize and then a second missile is fired to exterminate them also.

Amnesty International and other groups contend the follow-up strikes are more likely to target innocents and, as such, are war crimes.  The critics are right.  It's obvious to the point of being blatant and it's inexcusable.

Mafia hitmen use the Double Tap.  The supposed leader of the free world isn't supposed to emulate them.

This isn't even guilt by association.  It's guilt - and a death sentence - by proximity.  That's murder.
Posted by The Mound of Sound at 7:57 AM

Really, it's much worse than what Mafia hit men do. Imagine a Mafia hit man went to his target's home, killed him, and then waited around for a while to blow away any wife, kids, or friends that showed up.