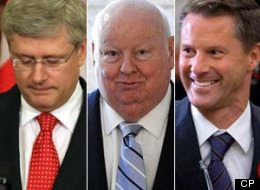 At some point some academically inclined chronicler of Canada's Parliament is going to sift through records of decades past to discover how many prominent Canadian senators, notionally representing distant provinces, were in fact permanently resident in Ottawa.

That person will discover that this resident/non-resident business was never an issue until, quite recently, it became an issue.

The "ordinarily resident" business harkens back to an era past when senators were required in Ottawa for a modest number of days each year and then, when they awoke in their club chairs, would board a train and head for home.  If they stuck to the actual business of the Senate they could probably still do that.  However they've become political mules for the elected side of their parties.

So, when you add the days the Senate is actually sitting and they're required to be in Ottawa to the days they're slogging around the country, end to end, fundraising and electioneering for their parties, there's no way in hell some of them can be ordinarily resident in a province except Ontario or Quebec.

Now, Shifty Steve could have addressed this issue openly and honestly when it became an issue.  He could have explained the facts and called for amendment of the outdated legislation.  The public would have understood.   The Liberals couldn't complain for they had plenty of this in their turn.

But it's not in Shifty's nature to be open and honest, certainly not with Parliament much less the Canadian people.  He's instinctively a lying bastard with no illusions about his ability to persuade the public with honesty.   The convoluted Duffy-Wright scheme demonstrates exactly that.  Shifty Steve would rather lie and manipulate than come clean with the public.  It's his way and he's shown us that, over and again, for years.

Does that mean we should forget about the Wright-Duffy-Harper scandal?  No, not at all.  You play the cards you're dealt.  You live with the laws in effect at the time, especially those laws that are the only defence we have against corruption of our parliamentarians.   This is about an under-the-table scheme to pass money to a senator in connection with that senator's official status.   It is about a gift of money that came with threats and inducements - carrots and sticks.  It is about a very seriously illegal and corrupting transaction undertaken within the prime minister's own inner sanctum and, we're told, at his personal direction.

We can't condone this sort of law-breaking any more than we should tolerate a scofflaw prime minister.

Before I forget, one other thing.   Just because Shifty Steve Harper has so wantonly corrupted the Senate of Canada offers no justification whatsoever for abolishing the Senate.   He has, after all, corrupted the House of Commons even more thoroughly and no one is calling to abolish that.
Posted by The Mound of Sound at 10:33 AM

"Before I forget, one other thing. Just because Shifty Steve Harper has so wantonly corrupted the Senate of Canada offers no justification whatsoever for abolishing the Senate. He has, after all, corrupted the House of Commons even more thoroughly and no one is calling to abolish that." MoS

I am one of those Canadians that does not want the Senate abolished, or even all that reformed, I would characterize my views as more tweaking than anything else, and mainly on the appointments selection process side. I happen to think that the Senate DOES provide a valuable process side function, that most of the time what it does is quietly ignored, but the committee work alone that it does creates a very valuable resource for making good legislation (when you have a government that believes in our motto of good government, something Harper clearly never has) and that even with all its faults it is on balance more of a benefit than a detriment. Just ask those that believe that abortion is a medical issue not a criminal one, it was the Senate stopping the government of the day from trying to write criminal abortion law after the Morgantaler decision in the late 80s that is the direct basis of our current legal approach to abortion being solely a medical issue. That btw appears to be something Dippers forget about whenever they say the Senate has done nothing respectable since their party was formed, unless the NDP has suddenly dropped the premise that abortion is solely the woman's right to choose or not without interference from their core beliefs anyway.

I know I am in a minority view group, especially these days about the Senate, but it really irritates me to listen to various leaders over the last few decades go on and on about abolition when it can't been done without the Constitution being opened up and likely it is one of those things that requires full unanimous consent to and not just the already difficult 7 Provinces/50% rule. The degree of pandering to ignorance inherent to that approach is one of the things that really dumbs down our political health and I hold in contempt ANY party leader/politician that prefers to deliberately pander to that ignorance rather than deal in reality because it is easier to score political points that way. When our civic leaders deliberately pander and foster civic ignorance is it any wonder the wider public doesn't understand what is going on anymore?

Sorry, a bit of a sore point with me. Harper could never have risen to power if there had not been this level of complacency in the public regarding the need to understand basic civics (and this goes back a good half century I would argue ever since civics was de-emphasized in public education) because after all a demagogue could never rise to power, no it can't happen here too many people said/thought. One of JTs good points to me is that he doesn't appear to pander to that ignorance unlike Harper and Mulcair on this point, and I find it a refreshing change. I take process issues so seriously because if we don't have a healthy process we can't have good government no matter the personalities and political affiliations actually looking to operate that mechanism.

I could live with abolition. But if we keep the Senate, I don't really want it elected. The ramifications of that go way beyond what many proponents have thought through.

On the other hand, I don't like "appointed by the PM" either. I think we've seen plenty of problems with that over the years; Steve is just one, perhaps particularly bad, episode. I actually think a Senate appointed by lot would be best, like jury duty. You'd end up with a random sampling of, on average, mostly fairly ordinary Canadians, who aren't under the impression that they got there by being awesome people who are entitled to everything and anything, and who didn't actually get there by being unscrupulous liars and influence-peddlers. I could work with that as a source of sober second thought.

The senate must be abolished, the sooner the better. It serves no legitimate purpose, is totally corrupt, full of over-privileged Con and Liberal hacks, and is a huge waste of money.