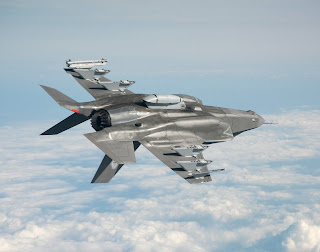 
The United States has embarked on a technology refresh development track for the electronic warfare (EW) module of the F-35 Lightning II Joint Strike Fighter to overcome obsolescence issues before the system has even made it into service.

This has seen the US Naval Air Systems Command place a USD149 million contract to Lockheed Martin, as a modification to a previous advanced acquisition deal and covers the "redesign and qualification of replacement F-35 Lightning II Joint Strike Fighter Electronic Warfare system components due to current diminishing manufacturing sources".

This is consistent with the criticism recently leveled by Aviation Week's Bill Sweetman that the endless delays in getting the F-35 deployed have played into its main adversaries' hands, allowing them to develop technologies to counter the airplane long before it even enters service.

The Canadian F-35 purchase appears to be more and more like some perverse joke. We are going to spend 70+ Billion dollars on an obsolescent aircraft which won't even be delivered for years to come? My lord, my lord.

I think we will be buying this warplane. It'll be a political decision. Once we're saddled with it we'll find out what its potential adversaries have up their sleeves and then we'll realize we got snookered.