Damn, they figured it out! 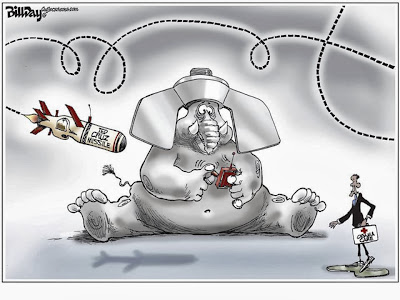 Last night, I woke up bathed in sweat. Suddenly, it had dawned on me who really is behind this mess in Washington. Canada! As I lay awake, all pieces of the giant puzzle quickly fell into place.
Not only has our neighbor to the North long been jealous of us: We’re bigger, larger, stronger, richer. Canadians are also fundamentally annoyed by the swagger of America. It runs counter to all what Canadians stand for: modesty and tolerance.
Long-range thinkers, the Canadians came up with a plan during the days of the Nixon Administration, the period when the United States had reached its previous height of unpopularity.
The Canadian plan was evil and ingenious at the same time. Incapable of outperforming our military or economy, they resolved that they would destroy the United States from within.
At the time, the Canadian Security Intelligence Service (CSIS) believed that a planting a highly skilled left-wing operator in the U.S. political system would do the trick.
Naturally, Canada’s then-Prime Minister Pierre Trudeau, hailing from the French-speaking(!) province of Quebec, had a more devious plan. How about growing a Canadian infiltrator with some U.S. roots from the ground up?
...And so it was that, on a cold December night in 1970, just two days before Christmas Eve, agents of the CSIS, duly instructed by their prime minister, shuffled into a hospital in Calgary.
There, an American woman and her Cuban husband were expecting their son, Ted Cruz. In borrowing the little baby’s last name the Canadians called it “Operation Cruz Missile”.
At the time, Ted’s parents worked in the oil fields in Alberta. In exchange for extending their residency permit in Canada for another four years, Canadian authorities pressed the hard-working parents to “lend” them their son.
From birth, Ted Cruz was indoctrinated by his Canadian coaches to eventually undermine U.S. democracy and prepare himself for a Canadian takeover of the big neighbor down south. After four years of schooling by the CSIS, Ted and his family returned to the United States as a Canadian sleeper cell.
...As the stalemate in Washington goes down to the wire, Canada’s Head of State, Queen Elizabeth II is busy drafting an offer to a select number of states of the union to rejoin the Commonwealth.
All the while, Ted Cruz is humming “O Canada” in the distinguished halls of the once powerful U.S. Senate. After all, those who mistrusted President Obama’s claims that he was born in Hawaii had been right all along. Birth certificates do matter.

Given that the US and A currently has a black, Kenyan born President should not present a problem for Calgary born Ted to present himself as a US Presidential candidate.

Well of course we didn't send a "highly skilled left-wing operator"! This wasn't a plot to help them out!

The fact that CSIS didn't exist when Cruz was born detracts a little bit.

Nice Post. Gerard Associates also offers advice in QROPS Advice, QROPS Transfers, Guernsey, QROPS list and other QROPS Pension Advice. . I know something about this same information, to know you can click here