Is China Ready to Make Its Move? Will Beijing Tear Up the Trans-Pacific Partnership? 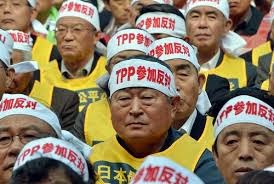 Most Canadians, and most Americans for that matter, don't appreciate the lengths the United States has been going to in order to contain China and slow its ascendancy - politically, economically, militarily and technologically.

China's space programme has been targeted by the United States using its ITAR trade regulation to prevent the transfer of American technology to the Peoples Republic. A recent assessment in Aviation Week concluded Washington's efforts have been in vain and may even have backfired on the U.S.  The Chinese have managed to easily source a lot of what they need elsewhere and the restrictions have accelerated China's own efforts to engineer new technology.   The Genie is out of the bottle.

What Washington tried to do with ITAR to thwart China's technological advancement, it has tried to do economically with the TPP or Trans-Pacific Partnership - a U.S.-led, Pacific Rim trade bloc that excludes China.  At the APEC summit underway in Indonesia, China has grabbed centre-stage, scolding the U.S. over its government shutdown and debt ceiling debacle and proclaiming that any Pacific Rim trade bloc must include China.

The ongoing blockbuster in Asia-Pacific is the clash of the FTAs; there are a dizzying, over 100 competing free-trade agreements currently in play. Negotiations at the World Trade Organization are, to put it mildly, a mess. So a lot of players resort to bilateral and somewhat multilateral FTAs. Overall, the top contenders are the 16-nation, ASEAN-led Comprehensive Economic Partnership (which includes China) and the 12-nation, US-led Trans-Pacific Partnership (TPP), which excludes China.. Xi stressed over and over again that China favors one FTA to cover all of the Asia-Pacific. And as far as Beijing is concerned, that won't be TPP - which is essentially a major US corporate racket that will lower tariffs across the spectrum to the sole benefit of US multinationals and not small and medium-sized firms in developing countries, all this under the cover of a dodgy "highest free trade standard". China essentially wants APEC to put order in the court. Obama has been too busy pivoting to himself instead of pivoting to Asia, more specifically Bali, to offer his spin - but the fact is Washington wants to ram up a TPP over its "partners" under a tight deadline, the end of 2013, glossing over key "devil in the details" discussions over market access (sweet if you're a corporate behemoth) and intellectual property (corporate behemoths marketizing everything).

...in 1994 - an undisputed Bill Clinton seemed to be dictating the future of Asia-Pacific. That was a sort of "pivoting to Asia" before the fact - and totally under American terms. Then, after the pivoting was first announced by ten an hen US secretary of state Hillary Clinton in 2011, she spun it as the dawn of "America's Pacific century".
This "Pacific century" seems to boil down, so far, to enforcing an already embattled TPP. Bantarto Bandoro, from the Indonesian Defense University, seemed to get closer to the real picture when he told the Jakarta Globe, "this could be the beginning of the end of American global dominance."